Expandable storage has consistently pushed into more affordable territory over the last decade, and with the occasional discount popping up here and there, it's easy to save on some pretty potent memory. Today only, you can grab a new SanDisk Ultra MicroSDXC UHS-I microSD card in 200GB, 400GB, and 512GB options for up to 15% off at Amazon.

There are a lot of phones that don't come with microSD card slots these days, and it's not always feasible to plug stuff into the USB port. That's when the SanDisk Connect wireless flash drive comes in handy. This device is on sale via Amazon for $29.99, about $10 less than usual and half of the MSRP. That's better than most of the Prime Day "deals" from yesterday.

How much storage do you really need in a smartphone? 32GB? 64GB? More? If you've got a microSD card slot and some extra cash, you can add a whopping 200GB to your device now that SanDisk's newest SD cards are on sale. The 200GB microSD card has an MSRP of $250, but it's a little cheaper in some places.

The new Galaxy S6 and Galaxy S6 Edge have a lot going for them. But one thing that they don't have is MicroSD card slots... which is kind of a big deal, since removable storage has been a notable feature of almost every Samsung Android phone, ever. With impeccable timing, flash storage specialist SanDisk announced the world's largest MicroSD card on the same day. I can hear Samsung fans crying out in frustration all the way from Barcelona. 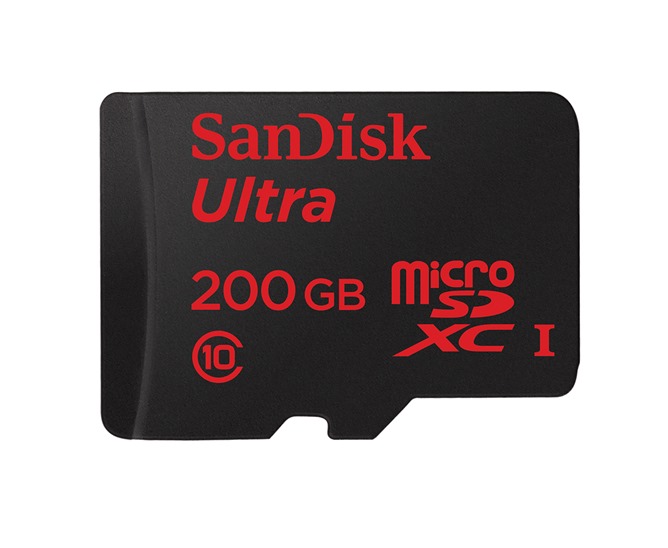 SanDisk's 200GB Ultra® microSDXC™ UHS-I Premium Edition card holds an astonishing 200GB of storage in a standard MicroSD form factor. Before today, the largest card offered by SanDisk (or anyone else) was "just" 128GB.