If you drive a tiny car like I do, you know the struggle of a long car ride, two passengers, two phones, and only one power port. If you'd like to alleviate that frustration, head on over to Amazon. Today you can grab a Tronsmart car charger that has two ports for just $7.99 with a coupon. The charger is compatible with Quick Charge 2.0, and on both ports to boot. If that's not enough to convince you, they're throwing in two MicroUSB cables for free.

To take advantage of that low price, add the Tronsmart charger to your cart, then check out and apply the coupon code "DUALPORT" to bring the price down from $19.99 to $7.99. Since then, Tronsmart has released a couple of new products (and updated some of the others), including an absolutely beastly new 5-port desktop charger called the Titan. Now, we've seen 5-port chargers before, so that's not what makes Titan such a beast — it's the fact that all five ports offer Quick Charge 2.0 as well as VoltIQ technology. Quick Charge is handy in just about any context, but it's especially useful in the car. With older phones on some roadtrips, using Google Maps navigation and streaming music at the same time actually made my battery power drop even as the phone was charging. With a Quick Charge-compatible car charger, that's no longer an issue. These upgraded chargers tend to be a little more pricey than their standard alternatives, but today Amazon has an Aukey-branded charge available for just $12.99. Add the coupon code 2P77G62C at checkout and you can take another $7 off the price, bringing it down to $5.99. Cables, the technological innovation that just won't die no matter how bad some folks want them to. There are wireless ways to charge smartphones these days, as well as options for transferring data without pulling out a cord. But frankly I still reach for a microUSB cable to do both of these things, and the number of people who do hardly stops with me.

Regular charging is just so lame, right? Quick Charging is totally where it's at, but many phones that support Quick Charge 2.0 don't come with compatible chargers. Even when they do, you probably don't have spares for around the house or in the car. Well, now you can pick some up for cheap thanks to Newegg.

Almost everybody knows by now what is good by having a device that supports Qualcomm's Quick Charge 2.0 standard. It will charge...quickly. The negative is that if you have amassed a stockpile of USB chargers over the years, none of your old ones can give you the speedy refuel. With Aukey's QC 2.0-compatible charger going for just $7.99, or half off of the full $15.99, after a coupon code on Amazon, you can grab one without feeling its toll on your wallet.

That's even cheaper than the deal we posted just days ago for $10 each, which was quite popular itself.

Everyone likes a good deal on a charger, and today we've got an Aukey 3-port USB charger with one Quick Charge 2.0 port, and two full 2.4A/5V ports (that's still 12W max on each) for a mere $12.49 after you put in the coupon code "ZP2ATZP2" during checkout. The typical price on this charger is $22.99, and it's not even been out a full month at this point, so this is quite a deal indeed.

Aukey's QuickCharge products are fully certified to meet Qualcomm's spec by one of Qualcomm's partners, so these are the real deal - not some fly-by-night operation. In case you were wondering (and it seems many of you were): the OnePlus 2 does not support Qualcomm's Quick Charge technology or any other sort of fast charge tech, and it also lacks wireless charging of any kind. As to the latter, well: it is what it is. No wireless charging.

Update: We've received a statement from Qualcomm clarifying the Quick Charge / USB-C situation. While there is no specific technological restriction that would not allow USB-C and Quick Charge to play nicely together, there are cost considerations. Specifically, Qualcomm had this to say: There are few places more suited to using Qualcomm's Quick Charge 2.0 capability (also known as Adaptive Fast Charging on Samsung devices) than in the car. You might have a 20 minute commute to work and in that span of time, you can get your phone halfway charged or better with the new charging specification, compared to the meager 10-20% you might get with a conventional 2.1A output. With today's deal on this Tronsmart car charger with both QC 2.0 and a conventional 2.4A port, you can get that in your vehicle for just $10. 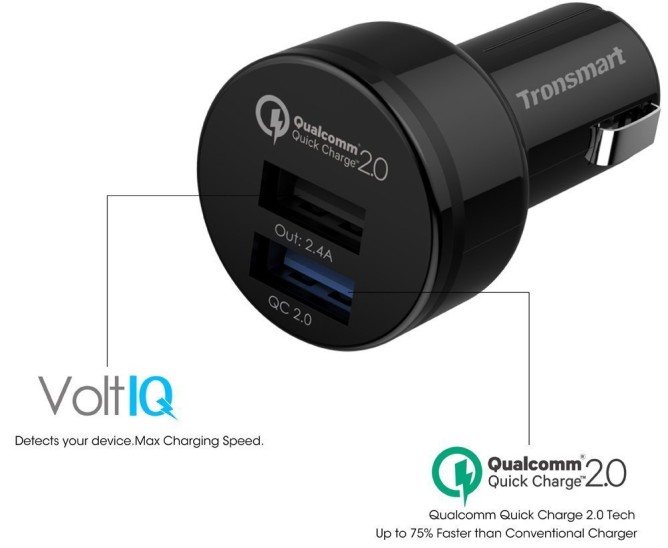 The above image should give you a pretty good impression of what we're talking about.