It always stings when you buy a device just before the price drops. If you happened to pick up a Nexus 7 directly from ASUS or Google, though, you may be in for some good news. Two separate partial refund systems are in place to compensate you. If you're in Europe and you purchased the slate directly from ASUS prior to October 29th, 2012, you can register for a €30 (or ₤25 for UK owners) voucher that's good for use in the company's online store.

Following yesterday's price drop at GameStop, it looks like the Nexus 7 is slashing prices everywhere. Staples, Sam's Club, Office Depot, Wal-Mart, and a few other places all list the tablet at $199 (or a rough foreign equivalent). What's a little more rare is the 32GB Nexus 7 going up for sale in a few locations, though it's unclear how approved that is. Sam's Club has it up for order here, and PC Advisor is reporting that at least one user was able to buy the slate from PC World by asking for it, though it wasn't on display.

We've been following the 32GB Nexus 7 meticulously over the past few weeks, and we're pretty sure it's going to be announced soon, possibly alongside a 3G variant of Google's hit 7" tablet. Of course, one of the most significant aspects of the 32GB N7's story is that it's expected to ring in at a $249 price-point, with the 16GB variant dropping down to $199.

We saw some proof of that earlier today at certain Office Depot locations, but now we have one more drop in the bucket – the 16GB Nexus 7 has gotten a price slash on GameStop's website, down to – you guessed it – $199.

Madfinger Games has taken to its Facebook page to make an official statement regarding the decision last Friday to remove the $0.99 price tag from Dead Trigger. The decision, which has angered many users who had only recently paid for the game, can be summed up in one word: piracy.

Regarding price drop. HERE is our statement. The main reason: piracy rate on Android devices, that was unbelievably high. At first we intend to make this game available for as many people as possible - that's why it was for as little as buck.

It seems retailers just can't get rid of the Tab 10.1 - and shrewd consumers are coming out ahead. You can pick up a Galaxy Tab 10.1 Wi-Fi with 16GB of internal storage for just $450 on eBay (free shipping) sold by DataVision. 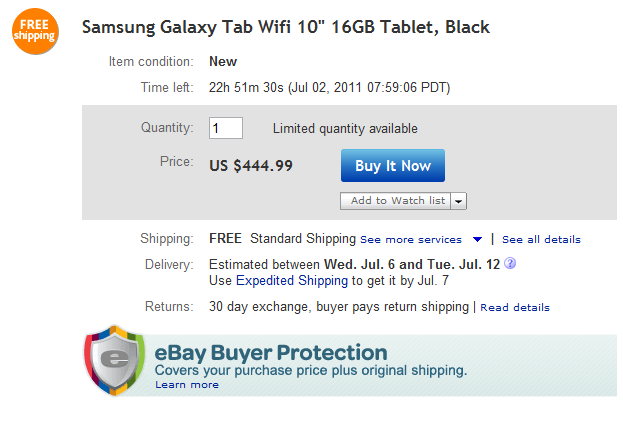 The Galaxy Tab 10.1 is probably the best Android tablet you can spend you hard-earned dollars on at the moment, and at this price (10% off retail), it's certainly not a bad buy.

Shortly after, Wirefly and Amazon Wireless both dropped the price to $99.99, making it a great deal for those who need only 1 Fascinate.