Samsung just won't let anybody catch their breath when it comes to hardware releases. Just a few weeks after the worldwide release of the Galaxy S4, the company has posted public information for a new press event, explicitly declaring that new Galaxy and ATIV devices will be on display. Galaxy is of course Samsung's everything, everywhere brand for Android, and for those not in the know, ATIV is their newer generation of Windows products.

Well folks, it's time for speculation and rumor on the Galaxy S IV to die... at least when it comes to the device's glamorous debut. Samsung Mobile division chief JK Shin confirmed to Edaily News (Korean) that the company's new flagship device will be revealed in New York City on Thursday, March 14th. The date was previously suspected after a well-known tipster leaked it earlier this week. Samsung has chosen to move its more typical European or Asian venue to the United States after it was "inundated" with requests from U.S.

While I was tapping away on my laptop trying to keep up with the Ice Cream Sandwich event earlier today, the desktop machine was happily recording it for future reference. This should hold us over until Google posts the official HD version - the video is about 1 hours long, but almost every minute of it is totally worth it (at least once you get to the juicy ICS bits):

Update: The official HD video has now been posted:

We can finally stop guessing when Ice Cream Sandwich will be revealed to the world in all its glory as Google and Samsung just announced the event would be happening in Hong Kong, October 19th at 10 a.m. HKT, which corresponds to 10 p.m. October 18th EST. As before, the live stream will be available at https://www.youtube.com/Android. 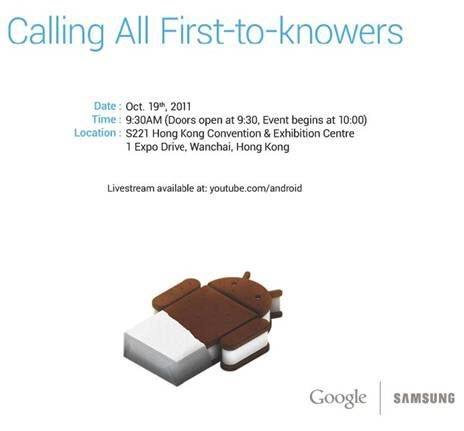 The Sprint event that we've been all looking forward to for so long is about to start in a few minutes. Tune into the live blog below for our on-location coverage.