Welcome to the great surveillance society: more people are installing Ring cameras as an affordable and easy way to improve the security of not just their household, but, through use of the associated Neighbors app which lets users share their footage with local police, their entire neighborhood. But while the consumer's benefits are seemingly clear, there may be hidden consequences as well: Gizmodo was able to acquire and uncover precise coordinate data from 65,800 Neighbors posts detailing where reporting households were located. Water is wet, the sky is blue, and police don't like people reporting speed traps and other law enforcement checkpoints. The New York Police Department sent a cease and desist letter to Google today, demanding that the company stop displaying DUI/DWI checkpoints in its Waze and Maps applications.

Birds gonna fly, fish gonna swim, dogs gonna bark, and unscrupulous people are going to find ways to steal digital content. Video piracy is more or less unstoppable (though reasonable prices and more convenient streaming have taken it down a peg), but if you brazenly sell gadgets with the sole intention of stealing TV shows and movies, expect a visit from Johnny Law soon enough. Several shady retailers in the United Kingdom have reason to reflect on this today, after police raided multiple locations selling "Android TV" set-top boxes designed more or less as piracy machines.

TorrentFreak reports that raids yesterday and earlier in June resulted in the seizure of hundreds of cheap white box Android devices, mostly running AOSP Android adapted for television use (and probably not the more legitimate Android TV software), loaded with illegal apps and tools for streaming and downloading pirated video.

Judge Steven C. Frucci made the ruling this week, saying that giving a police officer your fingerprint is similar to providing a DNA or handwriting sample, something the law permits. Divulging a password or PIN, however, requires admitting or handing over knowledge, something that's protected by the Fifth Amendment (you have the right to remain silent).

Last week we reported that a truck transporting 22,500 LG G2 smartphones headed for Sprint was stolen at a truck stop in Gary, Indiana. WDRB reports that at least one man who committed this daring high-stakes robbery has been caught in Louisville, Kentucky along with the 18-wheeler he stole. How was this fiendishly clever criminal apprehended? 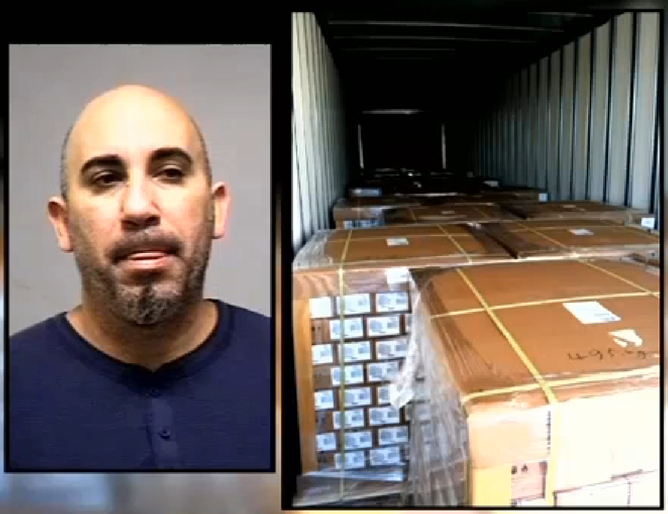 He drove the truck into a telephone pole.

No, seriously. Mr. Juan Perez-Gonzalez was arrested by the Kentucky State Police near the scene of the accident, where the truck apparently containing most or all of the LG phones was still sitting. The estimated retail value of the G2 smartphones is approximately $12 million USD.

Gmail 4.5 started rolling out today to Android devices (have you installed your update yet?), and immediately some of you noticed that it has definitely shuffled some things around. The bottom bar moved up top, the navigation is now on the left, and the multi-select checkboxes are gone. Don't worry, though - multi-select functionality hasn't disappeared. In fact, it's still very easy to use.

If you lost your Delete button, look no further than PSA: Your Gmail's "Delete" Button Is Not Gone In The New App, It's Just Hiding - Here's How To Re-Enable It.

A week ago, I posted a head-to-head comparison/buyer's guide of the Asus Transformer Pad (TF300), Transformer Prime (TF201), and Transformer Pad Infinity (TF700). The most upvoted comment: how is the internal storage performance? So I sat down to benchmark 6 devices.... and with the help of the team, ended up benchmarking 11:

At Mekerz86's suggestion, we used both RL Benchmark and AndroBench, both available for free on the Play Store.

Read More
This is the latest in our Weekend Poll series. For last week's, see Does The Google Play Store's Mobile Interface Need An Overhaul?

A pretty simple question this week: how do you follow Android Police? We've got a fair number of options:

So, do you follow us strictly via one method, or a combination of multiple? Check off all that apply below, then head down to the comments to discuss.

For the past few weeks, a very talented Android Police fan Mike Smith has been working on something special for us - our very own video intro that we can use as a pre-roll in the YouTube channel going forward. Today, I'm proud to show all of you the final product.

Here goes - the world premiere of the official Android Police video intro (toggle it to 720p to experience the best quality):

So, what do you think? Let Mike and us know in the comments.

P.S. You may remember Mike from this gem he created to show his loyalty to Android: