Managing photos isn't a new problem. Smartphones may provide us with a camera in our pockets all the time, but we've had to wrestle with how to store photographs since we started taking them. We've crammed pictures into photo albums and transferred images off digital cameras using USB cables. These days we're trying to figure out the best way to manage photos on touchscreen devices that let us take and store so many.

Slidebox is one the latest options to pop up in the Play Store.

Brief refresher: in September 2012, Google acquired a company, Nik Software. Nik is now a Google subsidiary, but it still develops the software it made before the acquisition: Snapseed, a popular photo-editing app for iOS and Android, and Nik Collection.

Nik Collection is today's focus. Google is taking the price down from $150 to the grand total of free. Google dropped the price from $500 to $150 when it acquired Nik three years ago, so this is a pretty good deal. The Collection is nothing to be sniffed at, either: it consists of professional-level filter plug-ins for Adobe products, including Photoshop and Lightroom, and Apple's Aperture.

Whether you call them UAVs (unmanned aerial vehicles), RPAs (remotely piloted aircraft), or drones, there's no denying that they are making waves. It's hard to bring up the subject without specifically talking about the DJI Phantom series. In the year since it was announced, the Phantom 3 has become the crowd favorite among photographers. Today, DJI announced the brand new Phantom 4, and it includes a boatload of improvements and new technology over earlier models.

The Phantom 4 looks a lot like its predecessors, but almost every aspect has been touched up or completely redesigned. The chassis is both stronger and lighter thanks to a new magnesium core, which should help in the event of a collision and hopefully bring up the flight time just a bit.

There are a lot of image editing apps on Android, and they all have mostly the same feature set. SKRWT offers something different that you might not realize you needed—and maybe you still don't. I'm torn on that, but the lens correction features in SKRWT have a lot of people excited. I liked the Live Photos idea and was certain that some enterprising Android developers would soon bring it to their third-party camera app.

500px is the home of a great deal of lovely photography, and the app has been updated today to be a bit more lovely itself. At least this is the assertion made by 500px. The new v4.3.0 is live in the Play Store with a completely revamped UI and a few small feature additions. However, Chainfire's 500px wallpaper app 500 Firepaper got an update too, and it's a much sadder story. The 500px community is very famous among photography enthusiasts. Along with Flickr, it might be one of the most sought after sites for sharing beautiful and breathtaking pics taken around the globe by amateur and professional photographers alike. It's no surprise then that the service is an excellent fit for the Chromecast and that it wants a place on your TV screen.

500px has worked with Google to bring a curated collection of featured photos from the service to the streaming stick as backdrops. This joins the newly added Facebook and Flickr Albums as an option for photos to display while your Chromecast is idling in the background of your room or office. The Google's Deep Dream program is a method for computers to analyze and recognize images with an artificial neural network. When visualized, its effects range from strangely appealing to completely terrifying (at least to our boring human eyes). Google showed off a visual version of some of its processing tools last month, then opened up the source code for developers. At least one or two of them probably got really excited and incorporated the code into new and interesting projects. The rest proceeded to use Deep Dream to turn Gawker and Buzzfeed into an extended LSD trip for about a week. 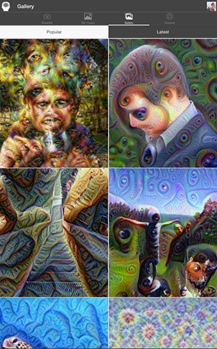 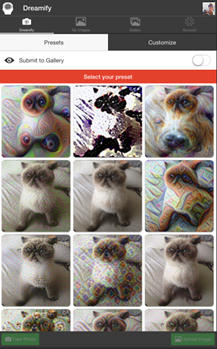 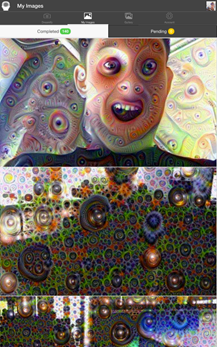 Want to join in the fun?