Motorola's mid-range lineup is all over the place right now. The company still has its popular G and E-series phones, but more recently, it has released a few Android One devices in some regions. A new leak indicates Motorola might be trying something new: a phone with a pen. Until February 1, U.S. customers can get a free Pixelbook Pen with the purchase of a new Pixelbook at the Google Store, Amazon, or Best Buy.

Integrated stylus functionality has become one of the big selling points for high-end portable devices, but the big players in this space, Apple, Microsoft, and Google, each charge $99 for their device-specific styluses. That's on top of the many, many hundreds of dollars they already charge for the iPad Pro, Surface, or Pixelbook devices themselves. So this is a risk-free opportunity for would-be stylus slingers to see if they would find such an accessory useful. Do you long for the simpler days of pen and paper? Do you need direct pen input to your tablet or phone for drawing or equations? Do you just want a really nifty folio case to make all the other board members jealous at the next meeting? In all three cases, Wacom has you covered. The famous graphics tablet company is branching further into mobile accessories with the Bamboo Paper, a folio that combines some impressive technology to let you write on standard paper and save your work digitally to Android or iOS. 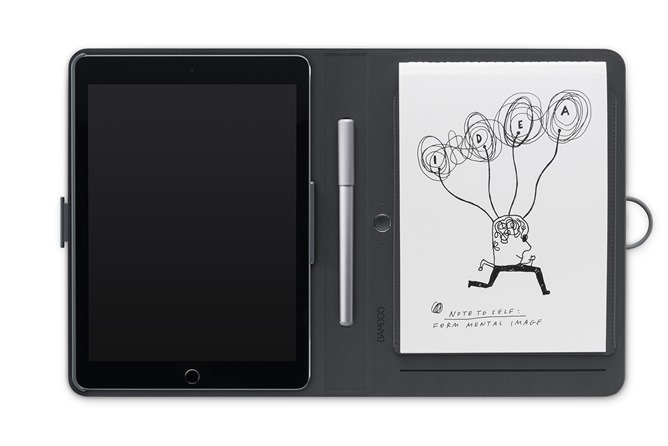 Here's how it works. The Spark includes a specialized Bluetooth-enabled pen, but it's writing in old-fashioned ink - there's no stylus, powered or otherwise, in the package.

In a continued quest to bring their handy functionality of the Note line's S Pen, Samsung has again updated the stylus' SDK, this time to 2.2.5 (a 0.0.5 bump over the previous update).

The update, which Samsung announced through its developer blog early this morning, brings one major feature – Multi Window and its related APIs. For those who haven't been keeping up with the Note line, Multi Window is a feature by which apps can share the screen by splitting it in half horizontally or vertically, sharing data through the clipboard or – in some cases – with simple drag-and-drop.

At a recent Samsung event, it was discovered that Sammy has retooled the Galaxy Note 10.1 to not only include a quad-core processor (which we already knew about) but also to include a place for the S-Pen to live.

The HTC dev site, HTCDev.com, announced in early June, opened its doors a few minutes ago to welcome developers from all over the globe into the wonderful world of what HTC is calling OpenSense. OpenSense is a collection of APIs, which currently includes Stereoscopic 3D, Pen, and Common Controls. Developers can download the OpenSense SDK, and view sample code together with handy API docs.

In addition to the OpenSense framework, HTCDev.com is also a new home for all HTC kernel source and ROM update downloads, various FAQs, and, probably the most interesting bit - the Bootloader Unlock tool (coming soon).

Pocketnow dropped some images of the HTC Flyer in T-Mobile regalia earlier today, apparently dismissing rumors that the unbranded version of the Flyer would not be headed to American shores. In particular, the image below of a rebranded T-Mobile USA YouTube page would seem to all but confirm that HTC's stylus-sporting tablet will be making a stateside-debut.

HTC's Flyer tablet runs Android 2.3 (with a planned upgrade to Honeycomb), and utilizes a single-core, 1.5GHz processor. The 7" tablet's pricing has to be confirmed, but speculation on a Wi-Fi only version (read: not this T-Mobile edition) hovered around $500-600. This device will then probably be getting contract pricing, but it's anyone's guess as to how much a subsidy T-Mobile is planning.

The second of our HD videos from yesterday's Sprint press conference has finally been uploaded (no thanks to the ultra-crappy WiFi everywhere...). Once again, a quick recap of the specs:

As mentioned in our hands-on with the EVO 3D, the View 4G features a new connector port dubbed MHL. It combines the functions of microUSB and microHDMI into one port. For more details, hit up our primer.

All things considered, the View 4G has potential in a lot of ways.