PayPal-owned Venmo appears to be going through a service outage which is preventing users from making peer-to-peer payments. User reports to Downdetector began spiking around 10 a.m. PST today. A resolution, however, seems to be gradually rolling out.

Looking to kick back and relax this Friday afternoon with some streaming TV courtesy of Google? Well, your plans might be on hold. We're getting multiple reports of YouTube TV outages. Streams are failing to load left and right, and some users can't even log in. Google says it is rolling out a fix so you should be back up and running soon if not already. How's your morning been? If you rely on Google Drive, maybe not so good. Google Drive is experiencing a widespread outage today, preventing access to files and documents. Google is working on the issue and expects to have more news later this afternoon. Noticing something is amiss with SwiftKey lately? You are not alone. The keyboard's sync service has been broken for the last three days, and there's no sign of a resolution yet. SwiftKey is aware of the problem, though.

Reports are flooding in that point to a rather serious T-Mobile network outage in the northeast US. It sounds like most metro areas in that region are affected including New York, Boston, and Washington DC. The carrier is aware of the issue and is working on a fix. Here we are getting toward the prime Netflix window and everything's all busted. You are not alone in your inability to access Netflix. It appears to be down for everyone.

Twitter outages are becoming much less common these days. In fact, there was a time not that long ago that the fail whale was an almost daily sight. Twitter is going back to its roots this evening with an authentication outage that's been dragging on for several hours already. So if you're unable to log in, don't worry, it's not a problem on your end. 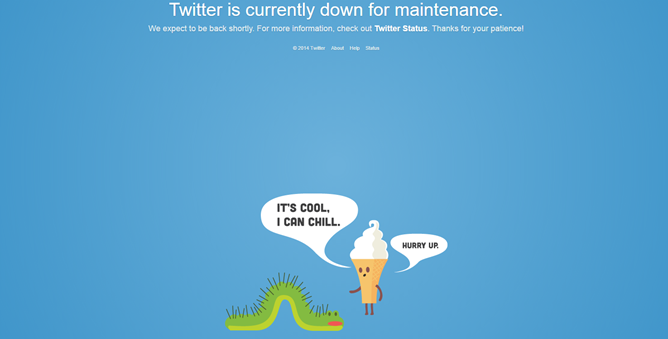 Trying to do something Googley this fine evening? No you're not—Google is suddenly experiencing widespread issues with services like Google+, Gmail, and Hangouts. This looks like a larger outage than most, but presumably Google is working to restore service.

It's been a rough morning for T-Mobile. Perhaps you've noticed your phone has been unusually silent, and people don't seem to be responding to your text messages. Well, the reason is probably the extensive outage Tmo has been dealing with for the few hours. That, or no one likes you. Either way.

T-Mobile hit by national phone outage http://t.co/ml3NkzCumU #tmobiledown RT if it's down for you too pic.twitter.com/RtHv9NzpFY

The problems are widespread, but not universal. It seems to be affecting data connectivity in some cases, but mostly voice calls. Affected areas are failing to connect any call, instead playing a recorded message saying that the number is unavailable.