So it's been a while since LG made a tablet. They aren't the only ones that have been skittish in a market dominated by the iPad and the low-margin Kindle Fire (I don't see Motorola or HTC rushing to make anything new). But as an in-country rival to Samsung, LG's absence has been felt more than others. It looks like the company intends to make a return with the G Pad 8.3, a sequel to the original Optimus Pad.

Remember that onslaught of dual-core smartphones and Honeycomb-running tablets we have been anticipating for a while now? It has already begun - and it is only going to keep on growing. The latest rumored release is for the LG G-Slate and G2X, which, according to TmoNews, are both set to launch at T-Mobile stores on April 20.

The dual-core G-Slate (also known as Optimus Pad) will be, along with the upcoming Galaxy Tab 10.1, the first Honeycomb-running rivals to give the Motorola XOOM a run for its money.

More news has trickled out for the high-end tablet releases we are about to see. This time it appears that the upcoming Optimus Pad/G-Slate from LG will be priced at $699.99 on T-Mobile, according to a pre-order listing on Mobile City.

LG's 8.9" tablet will be the first to incorporate 3D technology, and, like most other new tablets we will be seeing soon, it will have Android 3.0 'Honeycomb' under the hood.

Yesterday's announcement by Samsung of the Galaxy Tab 10.1 might have seemed like something of an echo of the Motorola XOOM. Well, with LG's recent unveiling of the Optimus Pad at MWC, we can still see some resemblance but with a few alterations making it worthy of further attention.

First up, the Optimus Pad refrains from the somewhat popular 10-inch screen diagonal seen on both Motorola and Samsung's tablets. If you have doubts about the handiness of a 10-inch device, it seems that LG shares your sentiments: the Optimus Tab scales the display back to 8.9 inches, while maintaining a similar 1280x760 WXGA resolution.

Just before tomorrow's Honeycomb event, T-Mobile is out to steal the spotlight with their G-Slate Honeycomb tablet that was announced at CES earlier this year. Back then, we had virtually no details other than the fact that it was running Android 3.0, but tonight, T-Mobile's spilling the beans:

What is highly disappointing about the G-Slate is the silver band that looked very much like a kickstand seems to be just a cosmetic element.

Today, we are seeing it again in an even more random creation - a homemade video by MysteryGuitarMan. 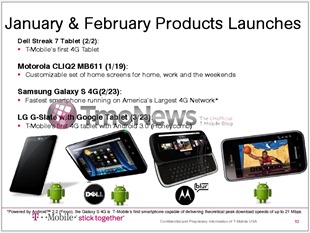 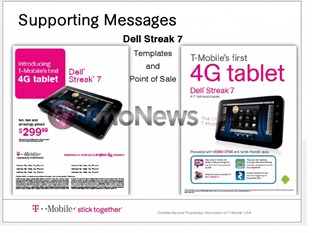 Since yesterday's Honeycomb video leak and the introductions of the Xoom and G-Slate, Android fans everywhere have been awaiting more information on the sweet tablet OS. Seems like our wishes have been heard and granted by T-Mobile who has unleashed videos of the G-Slate UI. In these we find brand new user interface layouts of Gmail, the browser, Gtalk (including video chat), Google Books, and the brand new homescreen interface.

Come on, you thought LG was just going to sit there and watch Motorola rip up the Android 3.0 tablet scene?

Quite the contrary - the company has just announced the G-Slate, a HPSA+ Honeycomb tablet headed T-Mobile's way. It's also going to feature the new Google Maps (version 5.0) as well as Google Books and Google Talk.

The closest you'll get to a release date is "in the coming months," and the processor, RAM, display, and other specs have yet to be announced, but we'll be sure to update the post if we happen to come across any additional information.