The 2012 Olympics are finally about to get underway this week, with the opening ceremony taking place at the Olympic Park at 9pm (British time) on Friday!

If you're visiting London for the first time over the next few weeks to take it all in, finding your way around can be quite daunting. Fortunately, there are a number of apps which you can download to help you get from A to B, whether you want to use the tube, get around on a bus or cycle your way through the city.

We've already seen official Olympics 2012 streaming apps for both the UK and the US, promising great mobile coverage of this year's games, but Bell Media recently introduced another solution, this time for Canadian Android users looking to stay up to date on the action in London.

CTV Olympics London 2012's main feature is, of course, live streaming video of the games, but the app also offers several other features that will keep users entertained and tuned in.

Earlier today, NBC released a pair of apps covering the 2012 Olympic games in London. But both of those are U.S. only. Fortunately, the BBC just released its own app so everyone across the pond can keep with the all the Olympic happenings while on the go. 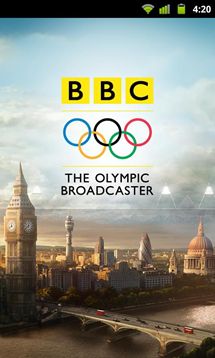 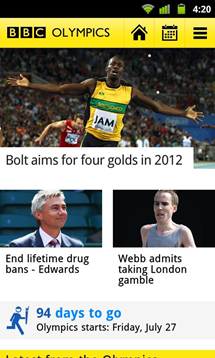 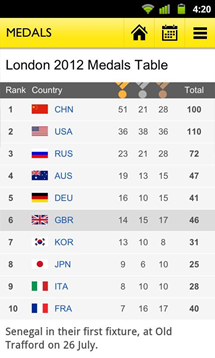 The app is completely free, but you must have flash installed if you want to watch live video and highlight clips.

With the 2012 Olympics rapidly approaching, television networks across the world are gearing up to cover every live event. NBC has gone one step further and released not one, but two Android apps to help you keep with everything that's going on across the pond.

At this point, both apps are lacking in the content department, which actually makes sense as the games don't actually start until the end of this month. Android-using Olympics fans now have another reason to be proud of their platform - back in May, the London 2012 Join In App was released, and now, the same developer has published the London 2012 Results App.

As its name suggests, this new creation features results from all sorts of sports, including both the Olympic and Paralympic varieties. Additionally, the app will allow you to keep up on the latest news, live schedules, and athlete profiles from the games once they begin.