The Notion Ink Adam II has been a long time coming, with the Indian manufacturer having announced two years ago that it was using Texas Instruments components inside the upcoming device. It finally became available for purchase just last month - in India. While the tablet is still not shipping to most of the planet, today is the day that the Adam II becomes available in Europe. The WiFi model goes for 219 euros, while the 3G model goes for 30 euros more.

Unveiled in December of 2010, Notion Ink's original Adam was intended to be an innovative, disruptive Android tablet that could compete with the iPad. Its primary selling point - besides a relatively high-end (at the time) dual-core Tegra 250 processor and 1GB of RAM - was a UI overlay known as Eden, which promised to make underlying the Android 2.2 more tablet-friendly. Launched to much fanfare in January 2011, the Adam never quite caught on the way Notion Ink had hoped; shipping delays, software issues, and poor build quality led the company to sell fewer units than anticipated.

The Notion Ink Adam has had a long sordid history. The 10" tablet that promised a full-color LCD display in the same housing as a transflective display that provides e-ink-like readability without a backlight looked great but failed to catch on in the market. The device still has its share of devoted followers, though. If you're among them, then we've got a tasty treat for you: an Ice Cream Sandwich beta.

Rohan Shravan, CEO of Notion Ink, updated a blog post yesterday with a rather nonchalant statement revealing that the source code behind Ice Cream Sandwich may be released November 17th. Yes, you read correctly – this Thursday may be the day. 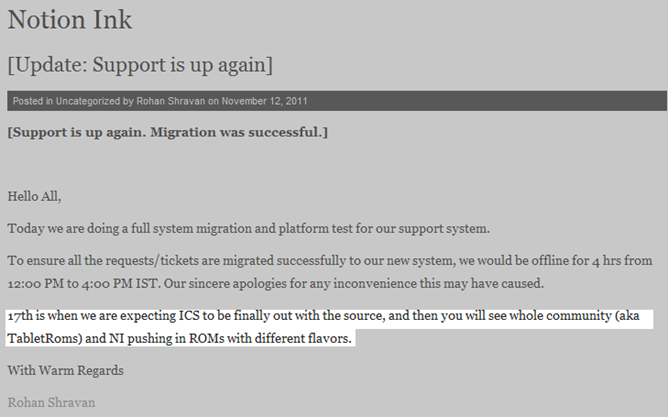 Normally a remark like this wouldn't be taken at face value, but Shravan already has a track record with this sort of thing, having accurately predicted the release of Android Gingerbread last year.

The successor to the odd little tablet that is the Notion Ink Adam is set to hit the streets in December 2011 and will be featured at CES in January 2012 in Las Vegas, according to Notion Ink founder Rohan Shravan. Hardware details for the Adam 2 are pretty scarce right now, but we're hearing rumors that it could include the NVIDIA Tegra 3 quad-core processor and an updated Pixel Qi display that allows for better use in direct sunlight.

The founder of Notion Ink has updated the corporate blog with a number of changes that are coming to the company's Adam. For those of you interested in the Tegra-2 powered 10.1-inch tablet, the company is also opening up sales again, albeit by invite only. 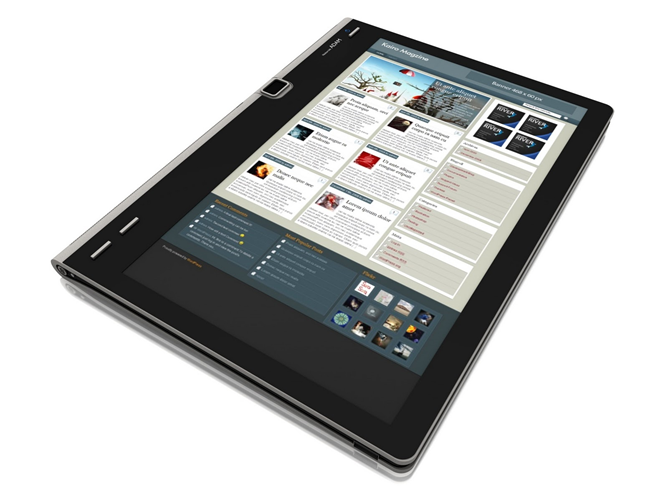 We've covered Notion Ink's tablet progress through a number of controversies surrounding shipping and build quality, but it looks like the tablet will be finally getting an update to Honeycomb by the end of June if all goes according to plan.

Ok, so we have some good news and some not-as-good-as-you-would-like-it-to-be news for Notion Ink Adam owners. Let's start with the good: according to the official Notion Ink blog, the kernel source code for the Adam has been released. Great, right? Now all of the custom fun that you've been waiting for is just around the corner, you just have to wait on developers to download the code and get to work.

Notion Ink is one of the most controversial companies in recent Android history - it's gone through product delays, building up one of the most passionate communities around, followed by communication issues that you could write a suspenseful thriller about (I am fairly sure there is enough for a trilogy with twists at the end of every chapter), and some of the weirdest reasons for shipments delays we've ever seen.

So far, the only communication methods available were commenting on the official blog, where your thoughts were quickly drowned in a sea of others', and emailing customer support, which probably resulted in more frustration and rage than trying to have a meaningful conversation with a concrete wall (those walls just don't get it, do they?).