Although Google Pay is gaining support for transit and boarding passes, the service is also frequently adding new financial institutions to its list of partners. Since the end of July, 16 more banks and payment services across Europe, Canada, and Japan, have made their way to Google Pay. Here's the full list below: It seems like almost every hour, some new small-town bank in the US backwoods picks up support for Google Pay. Well over two thousand financial institutions already work with Google's payment platform, including all the big names you expect, but a few more of smaller stature have been recently added. For those with an account at one of the banks listed below, it's time to celebrate.

Most of us probably have money on the mind, given tax day is just around the corner. As we're all going through records and transaction lists for the last year, I'm curious about how you choose to make payments. NFC's effectively universal availability gives people in 27 countries access to Google Pay, and Samsung phones have that sweet MST — just two names among a longer list of options. So, how often do you use contactless payments? In the early days of NFC payments, nearly every store with the proper terminals supported Google Wallet and other contactless systems. However, many retailers later shut off support for NFC, insisting customers use alternative platforms (like 'CurrentC') or apps they made themselves (like Walmart Pay). CVS famously started blocking NFC payments in 2014, but now the company has finally conceded. Google Pay's expansion across the world continues in Italy. Seven banks are available from the outset, so if you're a member of one of them, just add your Maestro, Mastercard, or Visa card to the app and you're good to go. While countries such as the UK and Australia wait for Android Pay to hit their shores/stores ("soon" is the official word), the US roster of banks has been heavily updated, with a further 55 new entries into the list of officially supported banks.

Most of these banks are credit unions - 45 in total from around the country. The other nine added are smaller but no less significant banks that have been patiently waiting their turn. Bangor Savings Bank, from Maine, is there, as is Fannin Bank, which has a grand total of two locations in Texas. The full list is below.

Because there's been such tremendous confusion about what cards Android Pay does and does not support, we decided to reach out to Google for some clarification. Basically, we were wondering if cards you have in Google Wallet with tap-and-pay that are not supported in Android Pay will still work once Android Pay arrives. The answer is: yes. But, there are caveats. Let's break this down as a Q&A.

To do this, you will need to open Android Pay and add these cards, then accept the Bancorp virtual card agreement.

Android Pay was announced at Google I/O around 3 months ago, and Google has since said we can expect the platform to launch here in the US sometime "later this year." It appears "later" could now be "like, next week," if this notice to employees at a McDonald's location is to be believed. 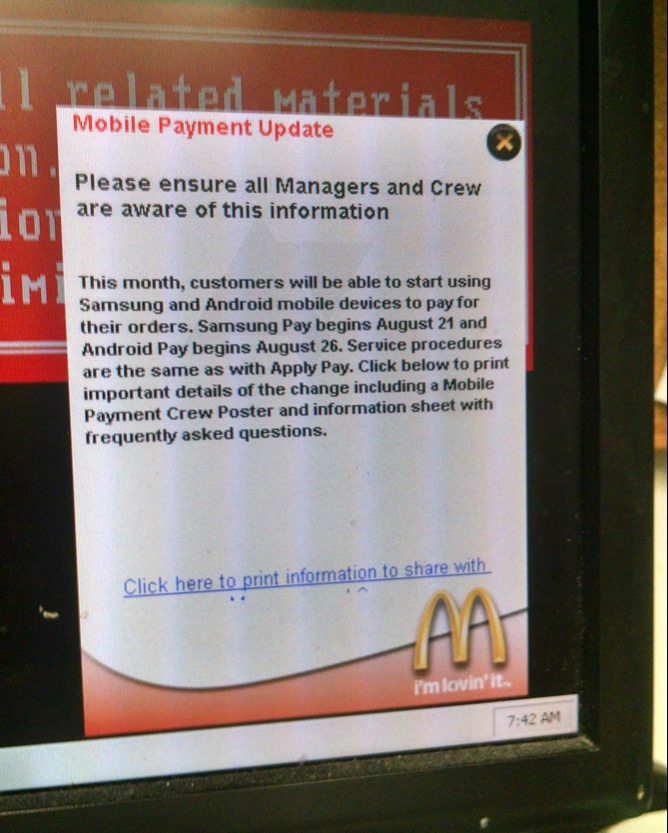 The August 21st launch for Samsung Pay is wrong, but it's the launch date for the devices (Note and S6 Edge+) - which seems like an honest mistake.