Perhaps you've heard of an upcoming phone called the Galaxy Nexus. It's just a little piece of awesome sent down from the Android Gods to bring in the newest version of Android: Ice Cream Sandwich. Ever since it was officially unveiled on Tuesday night, there have been rumors flying around that Big Red may not be the network that will get this oh-so spectacular device -- but, thankfully, we can now put all that crap to rest, because Verizon just officially announced it.

Another hour, another sign ICS and the Nexus Prime are coming.

Did I say Nexus Prime? I meant Galaxy Nexus. That's pretty much official now. Verizon's Device Management system is giving up the goods this time, listing the Galaxy Nexus (I have to get used to that) in its database. 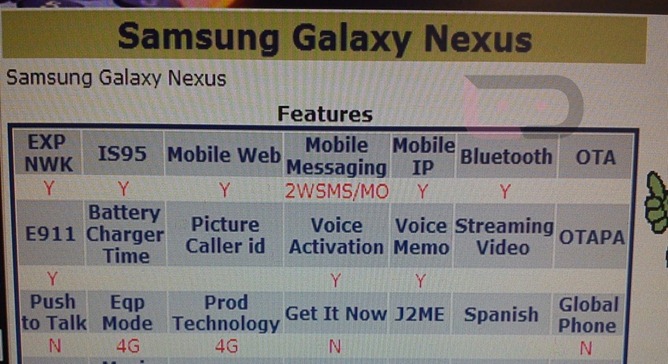 Also official is the 4G LTE modem, as if Verizon would let anything go out the door without one. Unfortunately. like most company programs, this database looks old and redundant, so it doesn't look like there's much more information to glean from this screenshot.

At this point, it's pretty clear that we've all been knee deep in Ice Cream Sandwich goodies all week long. We've already given you the Music 4.0.1, Google+ 2.0, and ICS Clock widget APKs, but that's not all - now we have some details regarding the CDMA Verizon Nexus Prime. At least that's what we thought it was called before Google and Samsung decided on the Galaxy Nexus as the final name, according to our reliable source who goes by Geek Vundotra (remember the leaked apps above?).

Hot on the heels of the leaked media files, we now have yet another leak, also courtesy of P3Droid, this time of the 12 wallpapers found in Ice Cream Sandwich. As someone put it on reddit: "I feel like whoever is leaking these is like some kind of psychopath giving us parts of his victim, piece by piece." That sounds pretty accurate, doesn't it?

You can download an app P3 put together (registration required) and use it to install these wallpapers, or if you want to explore by yourself:

It seems that sneak peeks of the next Nexus device - and its firmware - have really been picking up steam in recent days. Just after we were treated to video of Ice Cream Sandwich running on a Nexus S, the folks at MyDroidWorld have released the so-called Nexus Prime's boot animation to the public, and it looks, well, awesome. I've taken the liberty of putting together a clip of the boot animation by itself for your viewing pleasure:

If you need a refresher on how to install a custom boot animation, check out our guide on the subject.

First off, the crew over at MyDroidWorld have gotten their hands on the Prime boot animation, threw it on a Droid Bionic, and shot a video for all to see.

It's apparent that the Nexus Prime/Galaxy Nexus announcement is getting closer, as new information is starting to surface almost daily. Today, the hardware specs have been revealed by a "trusted source" in BGR's camp -- so let's have a look:

After reading through the specs, it's clear that there are a couple of things that may come off a bit...