It's not unusual to see slightly customized builds of Android rolling out to Nexus devices shortly after the release of a new version. It certainly happened a few times with KitKat, and it looks like Lollipop is on track to do the same. As the rush of factory images and OTAs roll out, AOSP is also receiving commits for the new device-specific builds; and Al Sutton was quick to put out changelogs for each version.

The Nexus 9 is a good tablet, but the price is a little high for what you get. You know what isn't priced high? Refurbished 2013 Nexus 7s. A cache of these tablets makes an appearance every now and then, and you can get one today on eBay for just $139.95.

Into every life a little rain must fall. Across every software update a few bugs will crawl. The most glaring problem for new users of Android 5.0 on the Nexus 7 2013 is a bug that appears to be stopping video playback dead. You can see a few users reporting the issue here, and we've seen it on at least one Android Police staff member's tablet. The good news is that there appear to be a few ways that you can fix it.

It's the moment you've been waiting for. Google just announced the Nexus devices are getting OTA updates to 5.0, and now the full system images have been posted on the Google Developers site. With these files, you can flash your device back to stock even after you've done unspeakable things to it. Can you feel it? It's in the air. Of course I'm referring to the impending arrival of Android 5.0 on Nexus devices. It's starting now with a full jump to Lollipop for devices that are currently on KitKat, and a small bug fix update for new devices like the Nexus 9. 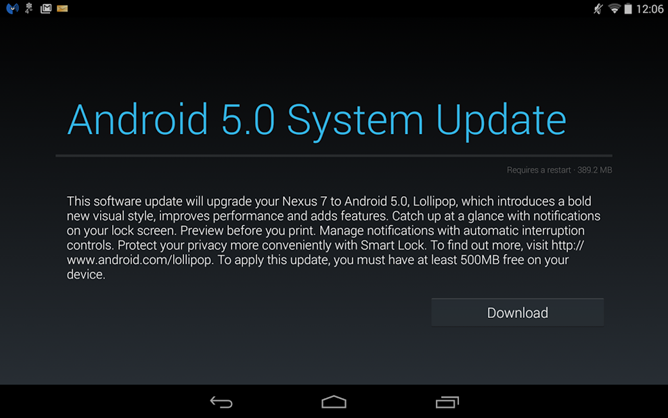 Sometimes late nights lead to interesting tips finding their way into our inbox. Tonight was just such a night. If you've been waiting to get a taste of Lollipop on your Nexus 7 2012, you're in luck. We just happen to have signed factory images for Google's original 7" tablet. The build is LRX21P, which lines up with builds we've seen on the Nexus 9 and Nexus Player (LRX21L and LRX21M respectively).

A new era is upon us. After having taken the wraps off this year's set of Nexus devices, it's time to clear out the old and make way for the new. If you head over to the Play Store now looking to buy a Nexus 7 or a Nexus 10, you will find that Google has listed them as no longer available for sale.

The time has come for developers (and the more curious users out there) to get a better look at Android 5.0 Lollipop. The update comes not via an OTA of any sort, but as a new flashable system image that can be applied to the 2013 WiFi Nexus 7 or the Nexus 5. Start your downloading.

Are you super-anxious to get your hands on Android L, now that it's been officially revealed as version 5.0 with the Lollipop name? Well tough noogies - it looks like we'll have to wait for the releases of the new Nexus 6 phone and Nexus 9 tablet before the older Nexus and Google Play Edition devices get their updates. But if you have a Nexus 5 or a Wi-Fi Nexus 7, you've already got the Android L Developer Preview builds as an option.

It won't be long now until the 2013 Nexus 7 is no longer Google's newest tablet. Depending on who you are, that makes now the best or worst time to buy one. If you don't care about having the latest stuff and would rather save some bucks, then this is a good time to do precisely that. Groupon has a refurbished version of the 32GB Nexus 7 with LTE (otherwise known as the expensive one) marked down to just $199.99.