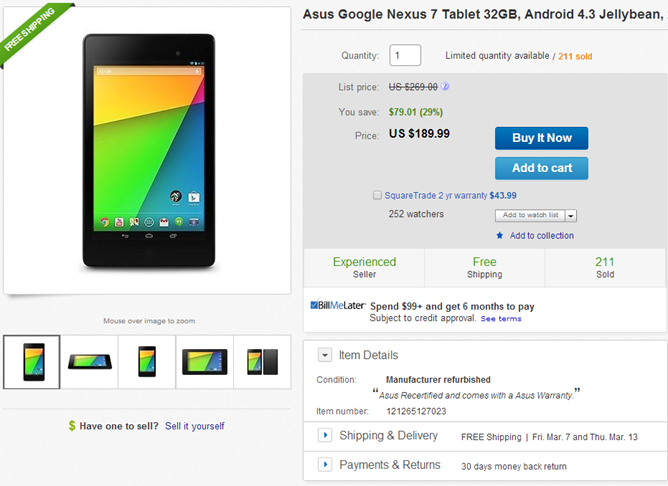 That's $80, or about 30%, off retail ($50 off the current price on Amazon) for a brand-new one, making this quite a deal even by refurbished hardware standards. The seller also isn't dailysteals, so hopefully shipping and customer service won't be such big worries on this particular listing.

This may be the best price we've yet seen on a refurbished Nexus 7, and if you're in the market for one of these devices on the cheap, read on. Buydig has its refurbished model at a list price of $172.99, a halfway-decent deal to start with, but they're willing to slash another $20 off that price if you check out with V.me by Visa after entering the promo code 'VMESAVESU20'.

If you head over to eBay Daily Deals, you'll find that the 32GB version of the Nexus 7 is on sale for just $229.99 with free shipping once again, this time from Adorama Camera. 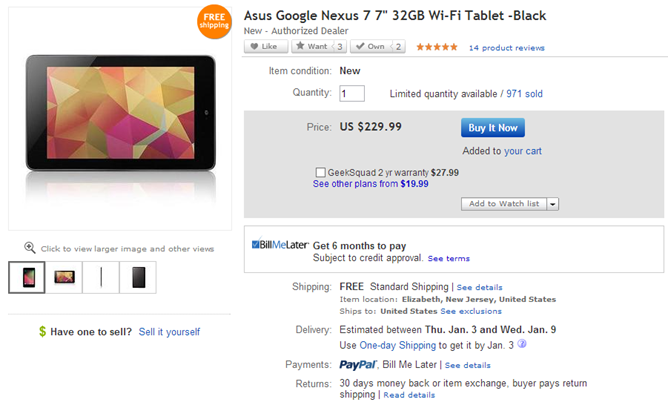 Tax may apply in your respective state, so be sure to check the total before you confirm your purchase (there was no sales tax in CA for me). Even with tax, you're probably saving some money anyway, so it's a worthy buy.

Update: The deal appears to be over, with a final count of 2000 Nexus 7's sold, which is quite a lot for an eBay Daily Deal. We're betting on similar deals popping up in the weeks before Christmas, so we'll be sure to keep an eye out.

eBay Daily Deals has an absolutely fantastic deal going on right now, and you better be quick if you want in on the action.