Google doesn't want developers naming their apps in ways that could imply association with or endorsement from Android, so instead of the Android Music Player, it prefers Music Player for Android. The idea is that this distinction makes it clearer to users that the folks who make Android had nothing to do with the creation of this particular app.

Now the Big G has expanded this guideline to all other brands. Android developers who visit the company's support page on the topic will see a new section dedicated entirely to this.

This change especially affects developers who create apps that integrate with a social network.

Looks like Samsung and Motorola have been hanging out at the local trademark office again, as both companies have registered names of some upcoming devices.

Samsung registered three new names (because we know how much they love to release at least one new Galaxy device every month week): the Galaxy Metrix, Velvet, and Legend (cough HTC cough). Aside from that, we only know that all three names were registered as "goods and services: mobile telephones, smartphones." Surprise, surprise. 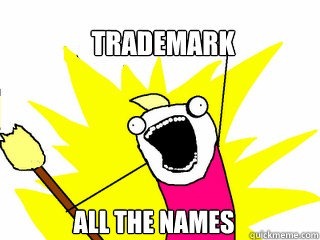 Motorola also trademarked the name of an upcoming device: the "Electrify Icon," which can be assumed to be a sequel to last year's Electrify smartphone (aka Photon 4G).