First I want to thank you for the amazing job you've done building and maintaining my phone.  It's my favorite phone I've ever owned by far.

Beginning August 5, you will be able to go to  a T-Mobile retail store to update your T-Mobile myTouch 4G to the most recent software version.

If you're a myTouch 4G user, we have some great news to bring to you today! A post has been written on the T-Mobile support forums announcing that the Gingerbread rollout will begin with a limited pilot starting from today, and it will reach all myTouch 4G users by the end of this year.

According to the post, "a broader rollout to myTouch 4G customers will begin in the  coming weeks" so if you aren't rocking Gingerbread this week, be patient!

While that still leaves plenty of Android users out in the cold, this is still a step in the right direction, especially with the addition of the ever-popular EVO 4G.

Available for a variety of devices, PowerSkins are, in a sentence, silicone cases with built-in batteries from which your phone can sip juice once its internal supply has run dry. 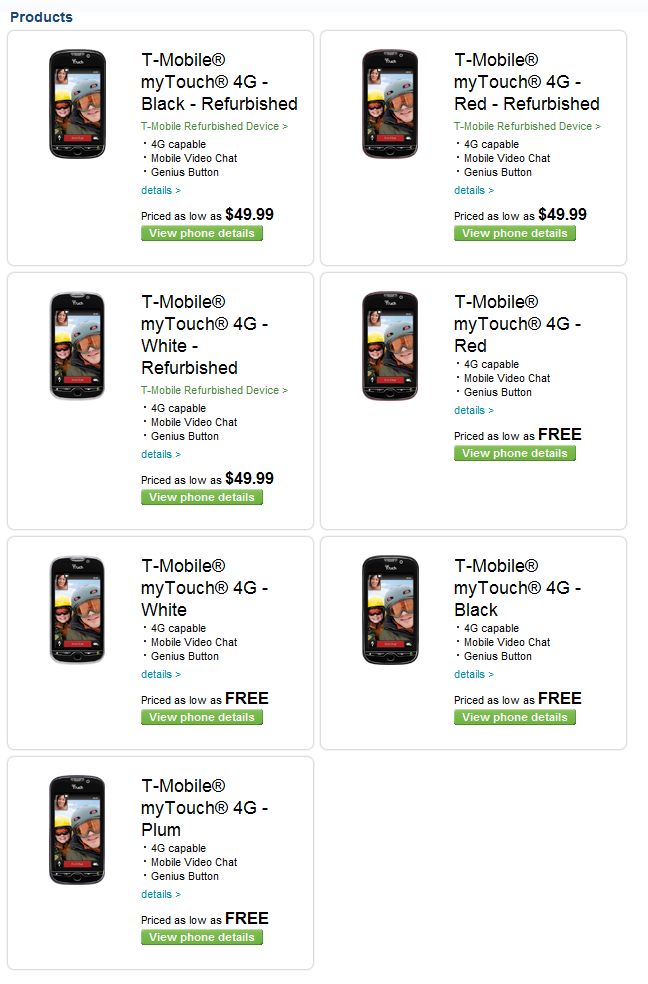 Strangely, the refurbished models are still priced at $49.99. Someone at T-Mobile must have neglected to change their prices!

It seems like only a few days ago the nation's fourth largest carrier launched its highly anticipated and well received first HSPA+ device - the G2. Those of us who aren't keyboard fans, however, didn't have to wait long, as yesterday T-Mobile introduced a second Android device to join HSPA+ ranks: the myTouch 4G. According to some of these early reviews, it's not only better than the G2, it may even be the best phone T-Mobile has to offer.

Before you get overly excited, there are a few disclaimers, namely:

Still, there's no denying the fact that this is a pretty hot deal as opposed to T-Mobile's $199.99 price, so hit up the source links to order yours.

Yesterday, T-Mobile officially rebranded its new HSPA+ network as "4G" in an effort to gain that extra G that consumers are so obsessed with (relevant: [1] [2]). In order to promote this newly proclaimed largest 4G network in the country along with the myTouch 4G that was released today, the company launched a video campaign that will air on major TV networks and websites.

The first campaign video features a fresher, younger, and even more vibrant replacement for Catherine Zeta-Jones (who has been T-Mobile's regular face in the last few years) in a familiar and kind of overplayed "Hi, I'm a Mac, and I'm a PC" style.