Motorola has been involved with mobile technology since the very beginning, but you'll be seeing that name a lot less going forward. After acquiring the company from Google, Lenovo has decided to retire the Motorola brand and go with the snappier "Moto." Shatter-proof screen? Check. Ginormous battery? Check. High-end rear camera? Check. Latest version of Android? [???fix later]. This is the story of the DROID Turbo 2 and Maxx 2, which were just announced today, October 27th, 2015, 22 days after Android 6.0 Marshmallow's source code was made publicly available, and multiple months since OHA members have had development source available to them for updates and new devices. Can we see why this is a problem? I hope we can see why it is a problem.

Here's the thing, Motorola. You're already in hot water with loyal customers because of software updates, and many more such customers are now worried that their devices, too, will end up abandoned before their time.

Motorola just "gets" Android. Rather than cover Android with a custom interface and countless add-ons, it has developed a handful of really focused, useful features for its devices. One of these features is Moto Assist, and an update to the Moto app in the Play Store has made it even better with the addition of location triggers. 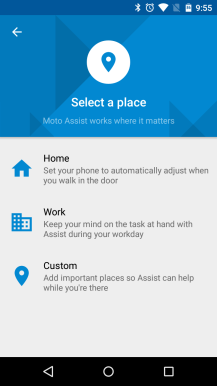 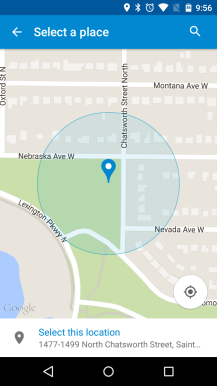 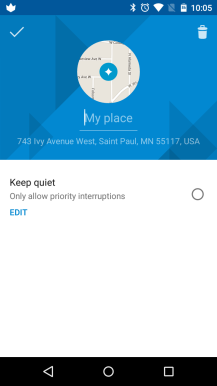 Reviewing a Nexus phone is always a daunting task. It’s one of the most important devices of the year for much of the Android community, and it represents - in theory - the very best of what Google has to offer on phones for the respective update period.

I’ll start by saying the Nexus 6 is a great phone, albeit huge. It’s also different from previous Nexus phones in a number of key ways, which I’ll try to cover as faithfully as possible in this review.

Besides just being a great phone, though, the Nexus 6 represents a shift for Google’s Nexus strategy. 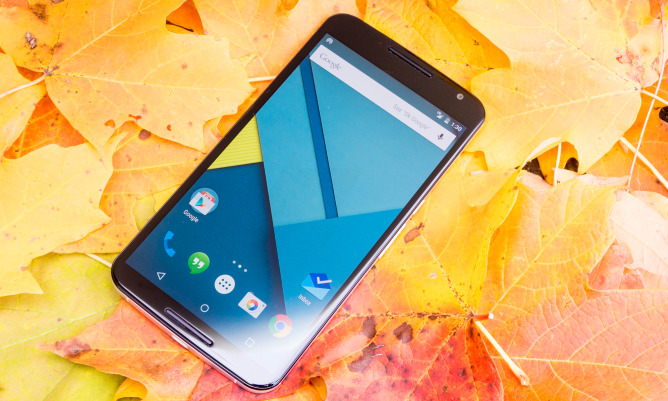 The Nexus 6, known until recently as Shamu, is a whale. It's really big. That should go without saying since the display is 5.9", but when you see it in person its size is truly striking.

If tonight can be compared to Christmas Eve, we've just seen a big, AT&T-shaped box sitting in the living room. As carriers are wont to do, it appears AT&T has already set up a URL for Motorola's Nexus 6, confirming that the carrier will carry the new whale-sized Nexus.

The URL won't take you to a product listing just yet, but if you travel a short way to the LG G3 Vigor listing, you'll see a tile in the sidebar showing the Nexus 6 for $49.99 on contract.

Note: This isn't a guarantee of the price as the page isn't final yet, and in fact it appears everything but the name and the tile itself are place holders - the image is the LG Vista, the same SKU currently holding a place in the "details" URL.

Thanks to MotoFirmware.com, Motorola's Droid Turbo has just broken cover in a detailed quick-start guide to the device covering its form factor, features, and much more.

The device, as has been rumored, has a 5.2" display. Besides that, it's got capacitive navigation keys, a big 21MP camera unit (with Moto's dual flash), and of course Moto's secret sauce including Moto Actions, Display, and Connect.

The guide doesn't show a photo of the back of the device, but it does confirm (on page 54) that a back plate that leaked last month is accurate. The back has a flash configuration different from the new Moto X - rather than a ring configuration, there's a flash on either side of the camera without a ring, spaced a bit farther apart than on the X.

Of course, we've seen alleged photos of this phone before, but one only showed the back, and one was very poorly lit. This photo, by contrast, is as well lit as we can possibly expect from a leaked photo, and shows the front of the device aligning with everything we've seen/posted so far.

What it looks like (or how it even came to be) are still up in the air, however. Until we know more concrete info (or hear an official announcement), there's no way to reliably nail down the details.

We've been hearing a lot about Volantis lately, but what about the other supposed Nexus device - Shamu? Since we originally broke the story back in July (with the Information affirming Shamu's existence soon after) things have been relatively quiet, with only a benchmark test here or there popping up with alleged specs that seemed to point to a smaller device.

Today, however, 9to5Google has divulged specs and details about the device in which the outlet seems fairly confident. 9to5 says it can corroborate the 5.9" screen size, and notes that "the device we've learned about" actually carries the following specs, some of which clash with earlier reports:

Worth noting is that 9to5's information aligns almost perfectly with information we received earlier this year, but they also sound very close to a device we've seen under the name Quark, which may in fact be the basis for Shamu.