Along with a few of its Indian-origin peers, Micromax had to shutter its smartphone business after the local market was practically taken over by Chinese players a few years back. Acting upon the increasing consumer interest in local substitutes for foreign products lately, Micromax has now decided to make a comeback with an all-new lineup and brand image. Under the new In sub-brand, Micromax has launched two new budget phones, the In 1b and Note 1, with a multi-year software support guarantee. The box you see above is Micromax’s media invite, sent out for its momentous return to India’s smartphone market after a long absence. But the charm of these quirky props all withers away when you read the prominent slogan in transliterated Hindi, “aao karein cheeni kum.” The phrase is used here as a double entendre, as the Hindi word cheeni is used for both sugar and the demonym Chinese, to allusively mean ‘let’s cast out the Chinese.’ This is Micromax stooping to a new low just days after its founder tried to capitalize on border skirmishes in a video promoting the brand’s resurgence.

Things have not been going well for HTC as it continues to hemorrhage money quarter after quarter. Its decision to sell off its Pixel division to Google didn't do anything to staunch the bleeding; it's just more blood to run through the sieve. Now, HTC is considering a bold strategy, according to a new report. The smartphone maker may simply license its name to other smartphone manufacturers. I would argue that Duo is a better product than Allo, at least in this early stage. Duo makes video chatting as simple as possible, and the result is a simple but easy to use application. Micromax, an Indian electronics company, has announced that four phones they are releasing in the near future will have Duo pre-installed.

Micromax didn't reveal too much about the phones, besides that they will be LTE-capable and will be under $100 USD. Google Product Manager Amit Fulay has said, "In the first month alone we have seen over 10 million downloads, with US and India being among the top countries." Cyanogen Inc. blew up its partnership with OnePlus last year in order to pursue an exclusive partnership with Micromax under its YU brand in India. YU has released a few devices running Cyanogen OS since then, but the internet had a touch of schadenfreude a few days ago when YU dropped Cyanogen from its Yuphoria phone. However, Cyanogen says everything is still cool.

Aside from the OnePlus One, the YU Yureka is the other Cyanogen-running smartphone that you can buy right now. It recently got its 12 S update to Lollipop 5.0 but is now receiving another OTA with a newer version. Just don't get excited thinking it's Android 5.1, we're still on 5.0 here. The build number has jumped from YNG1TAS0W0 to YNG1TAS1K0, which is dated May 1st 2015.

Cyanogen Inc's exclusive partner in India, Micromax has a new phone on the way called the Yuphoria. Why the funky spelling? Because it's part of the YU line of devices along with the Yureka. The Yuphoria is launching later this month with respectable mid-range specs and a low price. 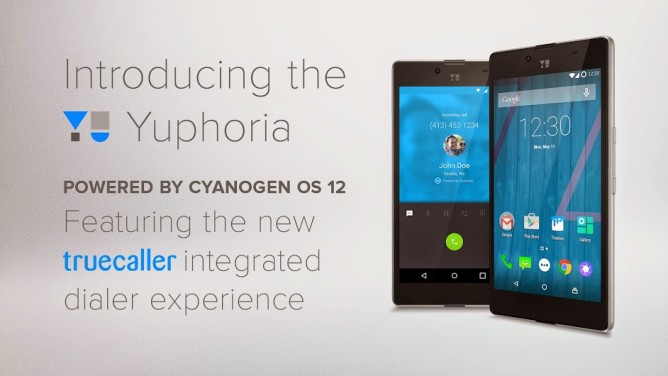