Think of the number one billion. A billion of just about anything is a lot - people, bananas, cars, pints of novelty ice cream flavors. According to a report published by market research firm Strategy Analytics, the number of Android powered smartphones shipped last year was approximately one billion, forty-one million, seven hundred thousand (give or take a few tractor-trailers worth). That's about one Android phone for every seven people on the planet, not counting tablets, set-top boxes, and other Android-powered devices.

The one billion figure is an increase of about one third over 2013, and with a total smartphone market of 1.3 billion shipped devices, Android dominates with an estimated 81.2% marketshare.

At this point, it's essentially impossible to deny that Android is beating other mobile operating systems with a big market share stick. According to a report issued by Strategy Analytics, phone manufacturers sold a combined 295.2 million smartphones worldwide in the second quarter of 2014, 249.6 million of which ran Android. That gives Google's OS a staggering 84.6% of the market share for new devices, up from 80.2% the previous year. 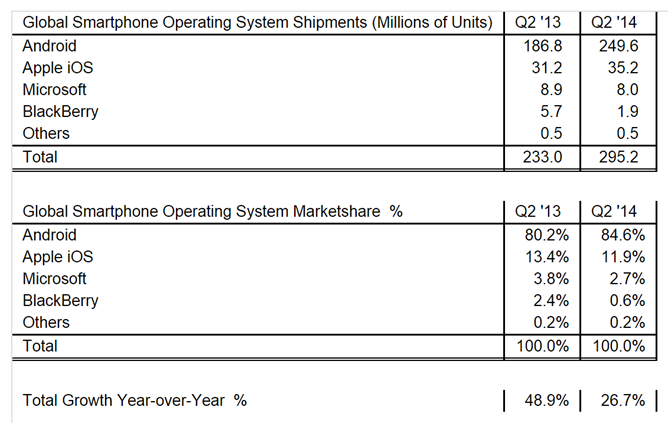 Apple is still in an easy but distant second place, with 35.2 million iPhones sold, accounting for the largest portion of the remaining market with 11.9%. Apple's sales rose from last year, but total market share fell. 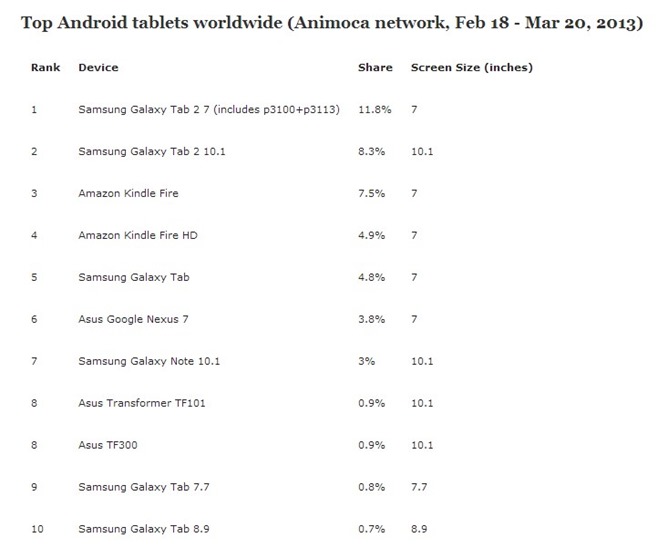 According to the firm—which distributes games and entertainment apps—the Galaxy Tab 2 7.0 is the top Android tablet with 11.8% of its network, followed closely by the 10.1 model of the same line. Following that is the Kindle Fire and the Kindle Fire HD which collectively make up another 12.4% of Animoca's users.

Every so often, with all the new device releases, lawsuits, feature scandals, and scathing editorials that fly back and forth across the tech world, it's nice to step back and take a look at the state of the industry from the comforting safe haven of numbers. ComScore's recent round of stats shows an unsurprising yet telling look at the US mobile industry. Predictably, Android remains the top dog with iOS following closely behind. For the period from May to August, gains made by both platforms were much higher than they were between February to May. Obviously summer is a pretty big time to buy smartphones, especially given the late-June launch of the Galaxy S III in the states.

So Eric Schmidt recently gave an interview at LeWeb 2011. In the middle of a conversation mostly about world governments and democracy, he dropped a bomb about the future of Google TV.

by the summer of 2012 .... the majority of the televisions that you see in the television stores here will have Google TV embedded in it

There were almost no details given on just how he expects Google to accomplish this, he only mentioned "a similar strategy to what we did with Android, the price is free." That's great and all, but Google TV isn't "free" to the consumer, you need a beefier CPU, memory, and storage to run the OS, all of which increase the price of the TV. 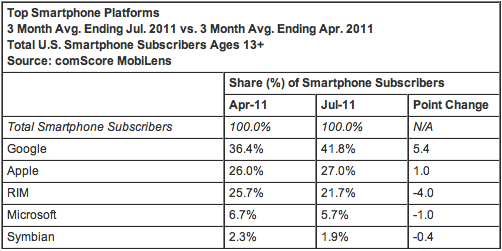 Additionally, the survey also looked at the market share of hardware manufacturers and interestingly Samsung was well ahead of the rest with 25.5% market share. I nearly choked when I first saw this figure as just a month ago Samsung's market share in the US was at a measly 8%.