Right on schedule, Google has just pushed out OTA and factory image downloads for the latest March updates to its Pixel line. Unlike last month, we've also got a pile of functional patches for the Pixel 3 and 3 XL which include improved storage performance and better "startup and responsiveness of [the] Camera app." Reports also indicate the update is rolling out already via the traditional means.

March Madness officially begins tomorrow (March 13), and before all is said and done on April 2, a whopping 67 games will have been played. It's tough to keep up with the sheer number of games going on, but it just got a whole lot easier thanks to the fresh-on-the-market official app, NCAA March Madness Live.

The app is free, and offers an impressive list of features:

- Live game radio of all 67 games
- Live social chatter for teams in every game
- Fill out your official NCAA Bracket Challenge bracket right from your Android
- Track the entire bracket live throughout the tournament
- Get alerts for upsets, overtimes, crunch time (close games), and your favorite teams
- Post directly to Facebook and Twitter
- Use My Channels to see where each game is on all four networks – TBS, CBS, TNT and truTV

You can also upgrade the package in-app for $3.99, which allows you to:

- Watch the NCAA Basketball Selection Show live on Sunday, March 11
- Watch LIVE streaming of all 67 NCAA Men’s Basketball Tournament games
- Watch a live stream of team practices for the Final Four®
- Watch highlights of all 67 games; highlights available right after each game
- Take it with you: Buy it once and use the March Madness Live account you create to login and watch on your computer.

Rovio and 20th Century Fox obviously think so - they've teamed up to develop a new version of Angry Birds based entirely on Rio. They say it's coming to "app stores" in March (hopefully that includes the Android Market), and will feature 45 levels to call its own. Check out this cinema-quality teaser video Rovio released:

Looks like the Angry Birds brand isn't going away anytime soon - which could be either good news or bad news, depending on how you look at it. 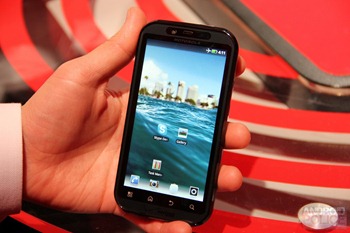 As for the Droid Bionic and the LTE-capable version of the XOOM, Sanjay said those devices should arrive at the end of Q2.

Were the four phones (and the one amazing tablet) Verizon announced at CES not enough for you? Then you'll be happy to hear that Droid Life has unearthed two more devices headed Verizon's way: the Motorola Droid X2 and the HTC Incredible 2.

Unfortunately, the Droid X2 will not feature a LTE radio, although it will pack a 1GHz NVIDIA Tegra 2 processor. Interested? Droid Life says Verizon is planning to release the device in May.

As for the Incredible 2, it is said to be an improved version of HTC's original Incredible, complete with a larger screen and a global radio.