Back at IFA 2018 in Berlin, right at the end of its presentation for the launch of the Honor Play, the Huawei sub-brand teased a follow up to the Honor Magic from 2016. The second generation Magic is now official, and it's an impressive looking device with minimal screen bezels thanks to a slide-up front camera mechanism.

The wonderful (and awful) thing about Hearthstone is that just as players are refining their decks to perfection to dominate the game, new cards are introduced that turn everything upside again.

The perennial trading card game from Wizards of the Coast made its Android debut last year, and it seems that the developers intend to give it regular updates, just like the PC version. Magic 2015 includes an expanded collection of cards that match the physical card game, though you'll have to shell out quite a lot of cash for the full set - not unlike the real-world counterpart. Magic 2015 is a free download, but you'll need at least 1.2GB of free space to hold it.

If you're familiar with the card game, you know what to expect: two players battle by laying down lands, collecting manna, summoning creatures, and casting spells.

How much free space do you have on your device? Can you make room for 1.2GB of additional game data? That's what you're going to need if you want to play the new Magic: The Gathering game. Yeah, these cards take up some space. 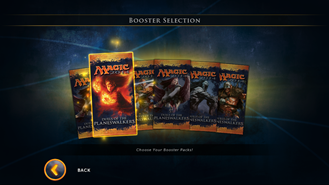 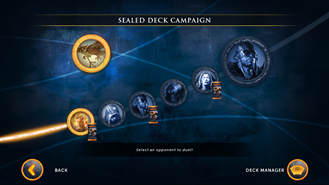 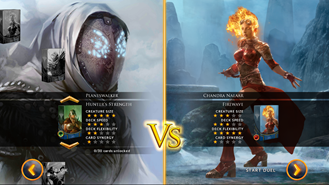 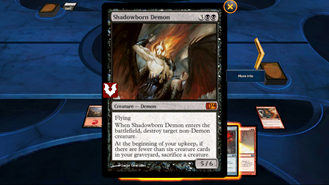 Ok, first I'm going to tap for a red to bolt the Dimir Guildmage and swing for 6. Then, tap another red and my Everflowing Chalice for 4 to summon a Deathforge Shaman and pay the kicker 5 times for 10 damage. See, you should have mulled in the beginning, you were too mana screwed to play your hosers. I've got the game unless you topdeck a Geddon. Oh crap, it's shutting down! No!!! I've been playing Magic 2014 all day and forgot my charging cable!!!

Thanks to Wizards of the Coast and a press release for Magic 2014 - Duels of the Planeswalkers, conversations like these are about to become way more common.

The Padfone Infinity is the tablet/phone combination we were expecting from ASUS today. It's got decent specs, and boasts ASUS' new AOCC "Ubiquitous Cloud" functionality, but has a rather stunning price, pegged at €999.

Forget ye old days of knights and nobility when you had to stick a dragon with a sword to slay the beast and win yonder fair lady. These days, medieval mythological warfare can be done via the comfort of your own phone. Dragon Slayer fulfills your fantasy by allowing you to engage in magical combat with a host of dragons, and dragon-like creatures.

As with most fantasy-based games, you can collect and upgrade equipment to become more efficient at ending the lives of rare, gargantuan reptiles. Each dragon has its own set of skills, magical abilities, and weaknesses to challenge you.

Google tends to put Easter Eggs into all Android OS releases - remember the one Jelly Bean came with? Turns out the company stuffs these treats into more than just the operating system, as the Nexus Q's Android app has it too.

Beneath the tough outer shell of the Q lives a lonely Magic 8 Ball. To summon this genie bipolar fortuneteller, rub tap it in the right place a few times, and out it comes. The right place happens to be the image of the sphere (first screenshot below) - just tap away, and the Q will eventually exclaim "Have a dilemma?