Google Photos might cost you money going forward, but Google is working hard on making it an enticing service nonetheless, with Google One editing perks and automatic creations that you can't find on other platforms. Now the company has introduced another stand-out feature: a Locked Folder. As more details about it are emerging, we've also learned about a potential dealbreaker for some — the Locked Folder is purely local on your phone, with no cloud backups available.

For ages, Spotify has allowed you to sync your own local audio files to your phone via its desktop client, though that never reliably worked for many people. It looks like the janky solution might be in for an overhaul, as app sleuth Jane Manchun Wong shared on Twitter. The streaming service appears to be working on an option to show local files.

YouTube Music has been groomed as a replacement for Play Music ever since Google rebranded its YouTube services last year, though we haven't seen much movement in that regard. About a month ago, YouTube Music gained the ability to act as a media player for local files, though only through other apps like file managers. Now, in-app local playback is being rolled out, paving the way for Play Music's deprecation.

Google has just unveiled a brand-new app designed for sharing inspiring stories between users who make up local communities. By giving every user the same platform, Bulletin hopes to unearth and highlight interesting news that would otherwise go unheard.

Google Maps is one of those apps that will always have an enormous number of potential new features, so it's interesting to see the things Google is focusing on with each new release. We just saw an update to v9.2 with new navigation settings and auto-correct for searches, but there are plenty of other really interesting additions in the works. Let's take a look at some of the features we might have to look forward to. It's time for a teardown.

Disclaimer: Teardowns are, by their nature, speculative and based on incomplete evidence. It's possible that the guesses made here are totally and completely wrong.
Read More

What do you do when you arrive in a new city and want to know what to do? I'm sure there are plenty of possible answers, but the correct one is to fire up Yelp. In the US, it's just hard to find a competing platform that offers the sheer depth and functionality that the service offers. Yelp displays discounts, allows user to make reservations, has Open Table integration, and - my personal favorite - gives quick access to addresses. The latest update to Yelp makes it even easier to discover what's going on locally with a redesigned Nearby page. Here's the before and after.

We've featured more than a few ways to save money on this site that have been found via Slickdeals. Today it gets even easier to spot those gems with a shiny new Slickdeals app. It includes both the highlights on the front page as well as access to the forums where eagle-eyed shoppers can share their finds. 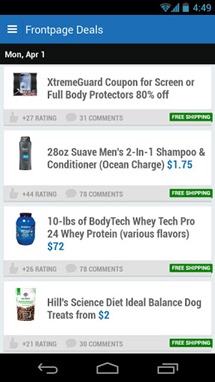 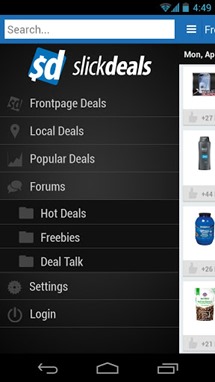 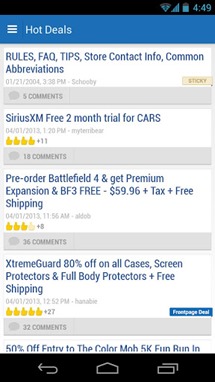 The app looks nice, with adherence to standard Android UI (for the Holo faithful among you) and even includes a handy side panel navigation area. Optionally, you can get push notifications for major deals if you want to make sure you don't miss a thing, and you can use GPS to find local listings aggregated from sites like Groupon and LivingSocial.

Believe it or don't, Fourquare has grown beyond hipster urbanites who desperately want to be the Mayor of the 6th Street Starbucks. More than a few businesses - independent or otherwise - are seeing the value in the location-based service. To that end, Foursquare has released its free business app on the Play Store, allowing local managers to update their business status for single or multiple locations. 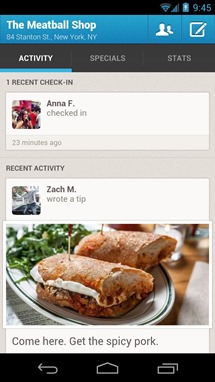 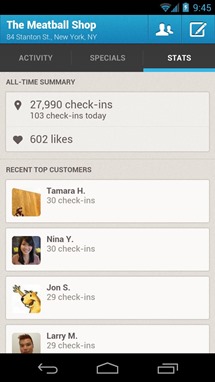 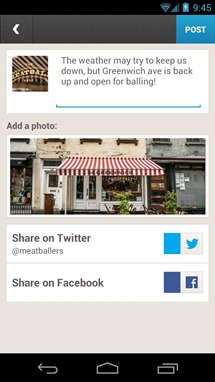 Within the Foursquare for Business app, you can keep tabs on recent check-ins, set specials for users, and look up in-depth statistics for your business's performance on Foursquare. You can also update your location's status and send it out to Facebook and Twitter.

As Google continues the work of expanding its Play Store services across the globe, it only makes sense that the giant is also working to provide a cohesive, pleasant experience for users in the 130+ countries that now support paid apps. To that end, Google has announced in a post to the Android Developers blog that developers can now include localized promotional graphics and video in their Play Store listings.

Basically, what this means is that developers can upload separate assets to ensure that users in, for example, the United States will see English-language graphics and video, while others around the world see materials in their own language.