Yesterday, something odd happened...the 2013 Nexus 7 LTE got an OTA before its Wi-Fi counterpart. Thankfully, it appears that it was only a day early, as Google is now rolling out its latest Android build to the Wi-Fi only variant as well. 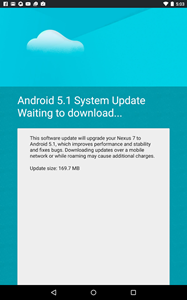 The OTA is build LMY47O, just like the LTE model, and weighs in at roughly 170 MB. If the update isn't available for you, fret not. We've got you covered.