You've probably lifted a picture from Google Images and dropped it into a school project or a presentation for work. But if you work in media — as I do for Android Police — you need to be sure that you have the rights to use the photos that you want. Now, Google is implementing new badges and filters in image search to make licensable assets easier to find.

According to a report published by ZDNet today, Microsoft has just made a whole pile of its IP available in a "royalty-free and unrestricted license" by joining the Open Invention Network (OIN), a shared defensive patent pool launched to protect Linux. By pledging these patents to the group, Android OEM members of the pool should have that same royalty-free access to the relevant patents, which cover Linux and Android-related technologies. Creating (and maintaining) a great app can require a ton of work, so we're happy to compensate developers for all that effort by shelling over a few bucks for their content in the Play Store. But while many app-makers rely on this income stream, a new bug that's popped up in a recent Play Store update threatens to toss a wrench in the works, interfering with how apps can verify paid licenses. Did you think the Angry Birds movie was an insane bit of zealous over-licensing at the peak of a mobile gaming fad? You ain't seen nothing yet. According to IGN, Cut The Rope developer ZeptoLab has partnered with production company Blockade Entertainment to create a computer animated movie based on the game's adorable monster protagonist Om Nom. Om Nom: The Movie is currently scheduled to release in 2016, notably the same year that the Angry Birds movie will hit theaters.

The official synopsis for the movie makes surprisingly little mention of ropes or candy, and sounds like an E.T. rip-off that came 30 years too late:

Om Nom tells the story of 13-year old Evan, a boy whose impulsiveness leads him to open a secret package containing a living scientific experiment - with mischievous intentions!

Since the recent update to MX Player, many users are running into a new problem: there's no sound in certain videos. It turns out the latest release of the popular video player removed support for two audio codecs: AC3 and MLP. Unfortunately, it seems this is a result of licensing issues, meaning MX Player will no longer ship with built-in support to play these audio formats. However, there is a simple workaround that will get things working again with relatively little hassle. 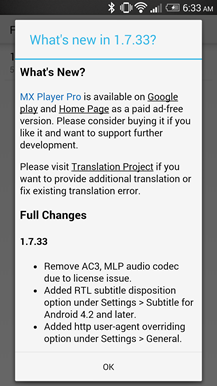 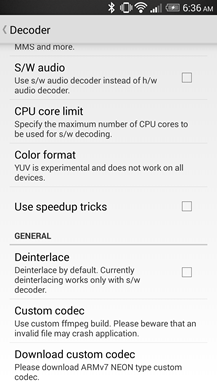 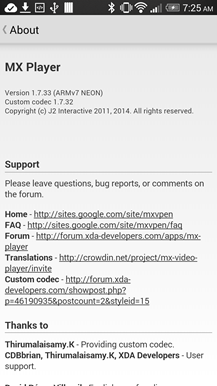 Restoring functionality is pretty simple, it only involves downloading a custom-built codec and pointing MX Player to the right file.

Following its similar deal with Samsung earlier this year, Google has just entered a cross-licensing patent agreement with South Korea's second largest smartphone manufacturer, LG Electronics. The deal covers both companies' current patents and those filed over the next ten years. The patents in question span "a broad range of products and technologies" as per LG's press release.

LG's relationship with Google has been solid over the past couple of years, with the company getting chosen to develop two Nexus devices. So it's no surprise that the agreement being championed by both parties. Allen Lo, deputy general counsel for patents at Google said that "by working together on cross-licenses like this, companies can focus on bringing great products and services to consumers around the world."

It wasn't that long ago when Google announced that it had entered a cross-licensing deal with Samsung, and just two days ago, it entered one with Cisco as well. Not to be left out, Samsung announced today that it, too, had signed a deal with Cisco. As a part of this deal, both companies will have access to the other's patent portfolios for the next ten years.

Like the deals that came before, this agreement aims to reduce the risk of unnecessary patent lawsuits in the future. In March of last year, Google started an initiative called the Open Patent Non-Assertion Pledge, which provides a pool of patents the company owns that it won't sue anyone ever as long as everyone's playing along nicely.