Hey guys, how's the ol' Optimus G Pro holding up? Pretty well? Good news! That guy is about to get even better, as AT&T is pushing the Android 4.4.2 OTA starting now. That brings about a bunch of new features, including some battery improvements, Project Svelte (which just generally makes things faster), and more.

Sprint has shared a small update rolling out to the LG Optimus G, but right from the beginning, let's temper those expectations. Version LS970ZVC doesn't do much - actually, there's nothing here really worth mentioning. A few bugs related to creating an email account and managing calendar events have been fixed, and that's about it. 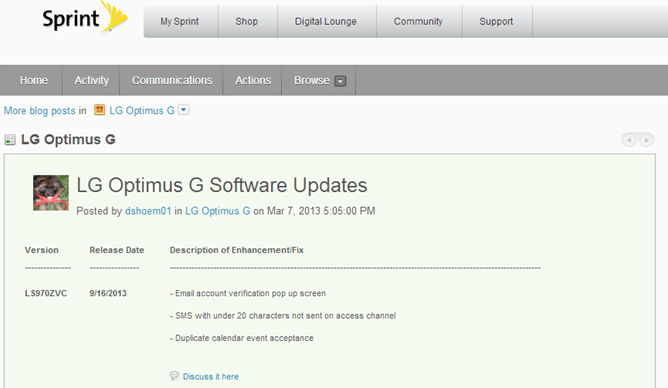 This is the first update Sprint's rolled out to the device since the big leap to Android 4.1.2 back in March.

Amazon is really killing it with these deals lately. This time it's selling the still pretty good LG Optimus G for $0.01 with a new contract. That might as well be free. Just yesterday AT&T dropped the price to $50, and now this. They're practically giving these things away.

If you're in the market and don't need the most cutting edge device, Amazon has a solid deal on the LG Optimus G for Sprint. The price for this handset has fallen to a single penny on a 2-year contract. This deal is open to all interested parties, whether it's for a new line of service or not. The Optimus G was previously only this cheap for new customers.

The LG Optimus G came out last fall, but it has since been overshadowed by the likes of the HTC One and Galaxy S4.

If those of you on Big Blue have been jealous of The Now Network's Jelly Bean offerings to the LG Optimus G, today's your lucky day. AT&T just announced the official Android 4.1 (4.1.2 to be exact) update for its variant of the LG flagship, complete with Google Now, expandable notifications, and all the other goodies that one expects to come with the full OS update. 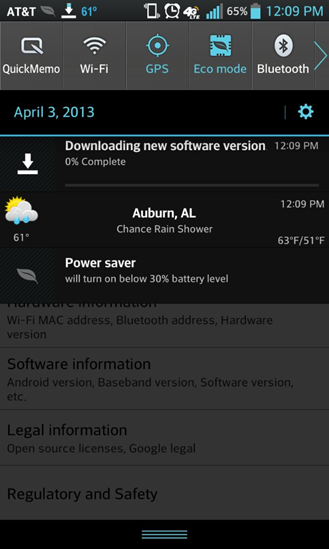 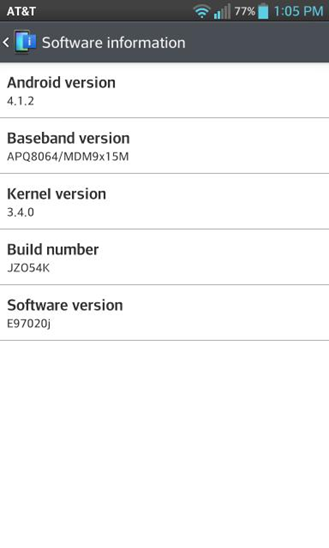 The OTA also enables the ISIS Mobile Wallet, which allows users in Austin and Salt Lake City to test the waters with the new mobile payment system.

We have some good news to share with our neighbors to the north: the Optimus G is getting an update to Android 4.1.2 Jelly Bean. Right now, this only includes customers on Bell, Rogers, and TELUS. LG says that SaskTel users will receive the OTA in "late March", which suggests it should begin shipping only a few days behind the other carriers. This version bump will bring support for Google Now, offline speech recognition, expandable notifications, and several other goodies.

The Optimus G on Japan's Docomo network is an interesting device, as it ships with a mandatory access control system that basically prevents remounting system, reading boot, executing tasks with root privileges, and things of that nature. Thus, the root process for this version of the Optimus G was a tricky one.

A backdoor found by Android hacker giantpune will be used, which allows the bootloader to be unlocked, a modified boot.img

If you have Sprint's version of the LG Optimus G, you may want to head into Settings > About phone and see if the latest OTA is available on your handset. The update – which bumps the device up to build LS970ZV9 – is just a small one that brings a couple of fairly minor enhancements to the device:

This just started rolling out today, so don't stress if it's not yet available to you.

It's pretty disheartening to get an awesome new phone only to realize the bootloader's locked down tight. That's means no custom recovery, no ROMs, no custom kernels, no... anything fun. Until, of course, some dedicated developers get ahold of the device in question and bend it to their will. That's exactly what Project FreeGee has done for both the Sprint and AT&T variants of the LG Optimus G.

The tool essentially unlocks the bootloader of both devices, allowing a custom recovery - and eventually, custom ROMs - to be flashed.

If you're looking to save a hundred bucks or so on the powerhouse Optimus G from LG on either AT&T or Sprint, Amazon Wireless is the place to be. The company just dropped the price of the device for both carriers down to $99, which is a fairly substantial savings for such a high-end device, especially compared to the $199 that both Sprint and AT&T are asking. 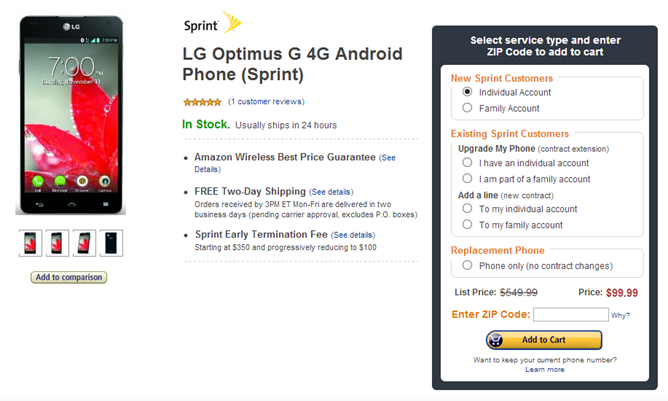 For those who may not be aware, the Optimus G has the same hardware guts as the Nexus 4:

As noted above, the big difference between the two is in the area of storage: the AT&T model comes equipped with 16GB on-board, as well as a 16GB microSD card; whereas the Sprint version has 32GB with no microSD card slot.