So this one came as a shocker to me: according to PocketNow, an official Gingerbread 2.3.3 ROM has been leaked for the Samsung Galaxy Ace. For those unfamiliar with the Galaxy Ace, it is a budget smartphone that's available primarily in the European market as part of a quartet of devices, including the Galaxy Gio, Galaxy Mini, and Galaxy Fit. 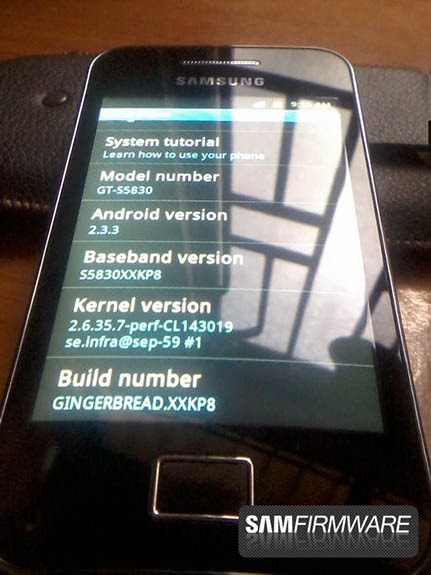 The update is probably not final and could contain bugs, so download it at your own risk.

The unnamed dual-core 10.1-inch Toshiba Android tablet that we got to play with at CES this year has oddly remained anonymous for an extraordinary amount of time - in fact, we still don't really know what its final name will be. An earlier rumor suggested it could be called "Antares," and today's freshly discovered Newegg pages curiously neither confirm nor deny that name, simply listing its 3 variants as ANT-100, ANT-102, and ANT-104.

This morning, an HTC Sensation ROM featuring Sense 3.0 got leaked online, and while we're waiting for it to be ported to various devices, I thought it'd be a good idea to download it and see if it has any new wallpapers, ringtones, or notification sounds. While I was a bit disappointed on the audio front (both notifications and ringtones don't contain anything new), most of the wallpapers were indeed brand new, except maybe bokeh (I ran them through TinEye's reverse image search).

This probably isn't going to be nearly as exciting as the title might lead you to believe - though it's good news nonetheless.

Techfrom10's Samsung Galaxy S was accidentally given access to the test Android Market via an OTA update, and they stumbled upon some goodies while using it. The Market itself has undergone no noticeable changes aside from the addition of the "Content Rating" information publishers are now asked to include as part of their submissions to the Market, so there's not a lot to see on that end.

The XDA forums are on fire this afternoon after a user posted a thread linking to a Polish Android forum, claiming to contain a download for an official Gingerbread build for the Samsung Galaxy S i9000. Before you get too excited, let me reiterate: this is not for US devices, and I would not recommend trying it on your Captivate/Vibrant/Fascinate/Epic.

That said, the handy development community will get their paws on this and have a field day, so you may be seeing unofficial Gingerbread ROMs for US phones (aside from CyanogenMod 7) start floating around on XDA in the next week or so.

Just as with the original Droid, Motorola is planning to follow up the Droid X with an even more powerful device, in this case a superphone on the same level as the Bionic. Although it looks virtually the same as its predecessor, there are a few noteworthy changes:

Unfortunately, not everything has been upgraded: the bootloader is still locked, which makes the possibility of a more open Atrix/Droid Bionic a little less likely.