Since the OTAs for KRT16S started rolling out in the middle of last week, some Nexus 4 owners updating from Jelly Bean are experiencing really troubling behavior after installing the new version. There are reports of issues with core interface functionality like a non-working Home button, Quick Settings toggle, a broken dialer, and various other issues. Not all affected devices have had exactly the same results, and many weren't hit, but some unusual complications have definitely started turning up.

Hooray! Shortly after the Nexus 4 OTA zip link was finally discovered, we can now say the same about both data-connected Nexus 7s - the 2012 3G edition and the 2013 LTE. These are the last devices we didn't have manual update links for, so now it's safe to say that the KitKat Nexus rollout has been fully completed.

Good news, everyone! The coveted Nexus 4 OTA to Android 4.4 is finally here after a brief delay caused by several serious bugs. It started rolling out very slowly a few days ago, but it wasn't until just now that we were able to finally identify the OTA zip urls for those of you who want to flash KitKat manually without having to wait any longer. No need to mash the Check for updates button over and over - let alone it doesn't actually do anything.

If you've recently updated your Nexus device from Jelly Bean to KitKat, there's a chance you're already being notified of an OTA update to KRT16S. If you're wondering what's changed, the collected list of source commits has been posted by Al Sutton. Most of the tweaks are pretty minor, including an improvement to the backup service, a few updated APNs for assorted carriers, and code to handle rare issues with the 3G Nexus 7 (2012) radio.

The first notable update for KitKat has just been released across most of the major AOSP and Nexus channels. According to Google software engineer Conley Owens, the KRT16S build includes bugfixes for the original Nexus 7 and Nexus 7 2013 (WiFi and mobile versions), Nexus 4, and Nexus 10. The binaries have already been added to the Nexus repository. 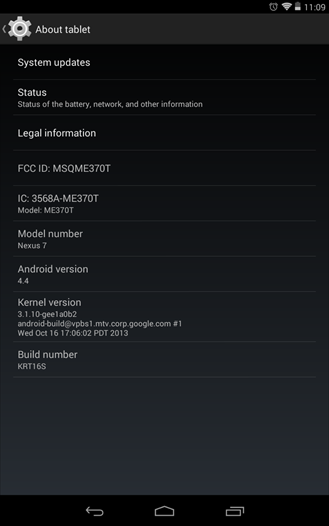 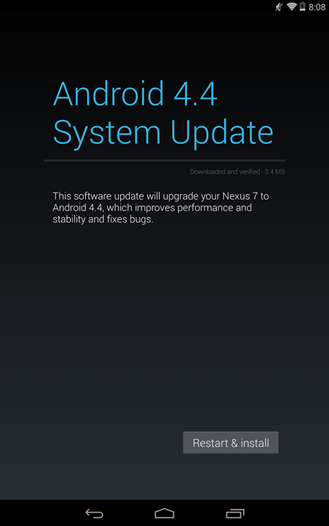 Google has also updated the factory images for the relevant Nexus devices.