Just last week Cody Toombs spotted the building blocks for a drawing function in Google's Keep notes app, and now it's live. The latest version of the APK, 3.2.435, makes it active and visible. You can wait for Google to get around to delivering it via the Play Store, or you can skip the line and download it from APK Mirror below.

Google Keep just received a relatively light update, bringing it to version 3.2. This one doesn't bring much in the way of major functional improvements, but there are a couple of things worth noting. There are brand new welcome images to help new (and possibly existing) users figure out how to get the most out of Keep. The apk has also lost a little bit of weight, and it's now ready for the new Android M permission model.

When Google unveiled its material design vision for Android 5.0, the changes included a new button that hovers in the bottom right-hand corner of apps. The Floating Action Button, or FAB, has become commonplace in the time since.

But in the latest version of Keep, Google wants you to forget all about it. The FAB is gone. In its place there's now a white bar across the bottom of the screen. This is now where you will go to create a new note, jot down a list, start a voice recording, or take a picture. 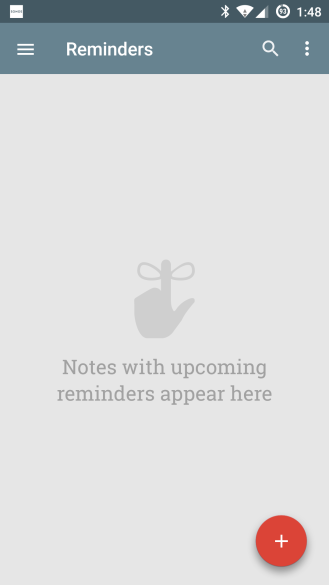 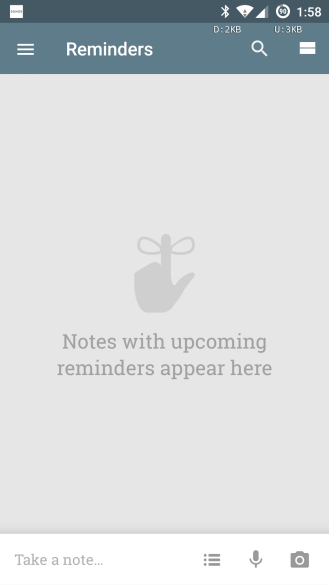 Is this a step forward?

Google Keep was one of the first apps to add support for the Android Wear platform, giving users a quick, simple, and mostly effortless way to record short notes without reaching for a smartphone. Since then, the main application has seen several updates, but the Wear-specific companion app has gone mostly unchanged. With the latest update, the tables have been turned, and it's time for the Wear app to go through a moderately sizeable refresh. 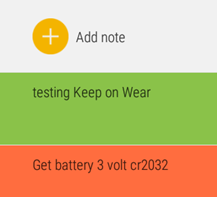 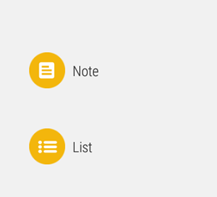 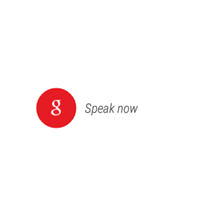 In earlier versions of Keep's micro apk, the app only served as a target for voice commands and a way to browse existing notes.

This update Wednesday brings the first big change to Keep in a few months. Google's note/list app has been bumped to v3.1 and it includes two new features—labels and recurring reminders. 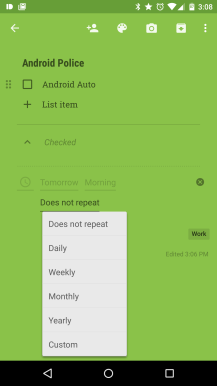 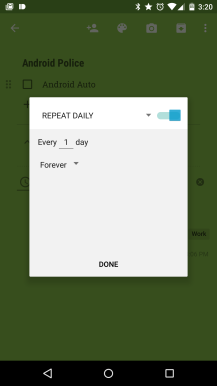 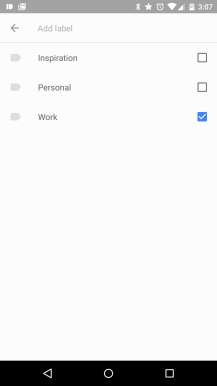 Update: The feature should be live for everyone. To get it, go to Google Keep on the web. You should see this message.

Once you share your first note, the feature will fire up inside the Android app as well. 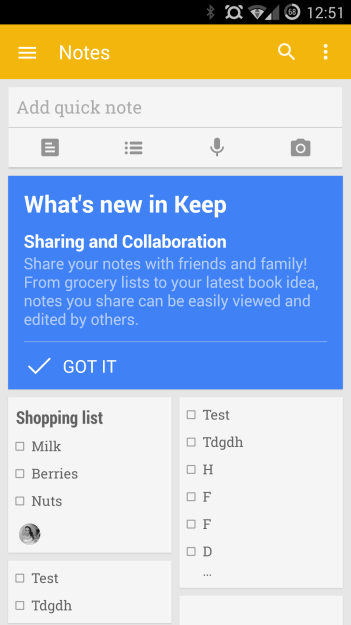 You don't need the latest version of Keep for this to work, but we're including the latest APK at the bottom of this post regardless.

Google will soon give Keep users the ability to share their notes with friends and family members. How soon? It says the feature will start coming to Android devices today through the Play Store. It may even be a server-side change, one that doesn't require an app update and is already hitting Android devices (but here's the latest update just in case).

Cross one more item off your list of Google apps in need of material facelifts! Next on this bountiful Update Wednesday, Google Keep is receiving a bump to version 3.0 with some new material-inspired touches, the most obvious one being its launcher icon. Instead of a realistic stack of sticky notes, we now have a single dog-eared sheet of paper with a lightbulb cutout sitting on top.

Once you're inside the app, there's plenty to look at. There's a new search interface that (like Keep's web update) allows users to search by type of note (list, voice, image, or reminder), or by color.

Last week, Google pushed out an update for Google Search, bringing the version number up to 3.6.13. While it added support for deep linking into apps and a few more of the bits to make hands-free operation a little more convenient, most people probably felt like they didn't get too much out of this update. As it turns out, we found one more addition that might interest a few more people. The best part is that it's probably ready to go as soon as Google pulls the trigger!

Sent From Your Computer

Google is preparing to send small scraps of text over the air that will appear in your notification shade for immediate action.

Google Keep recently got a pretty big update that includes searchable images, list settings, and lengthened storage time of deleted notes (also, more yellow). Those were essentially the advertised features that came in this update, but one redditor found another cool feature: conflicting edits.

Basically, if you are editing a note on two devices at the same time (or happen to leave it open on one), and save them at different times, Keep will now alert that there's a conflict. For example: 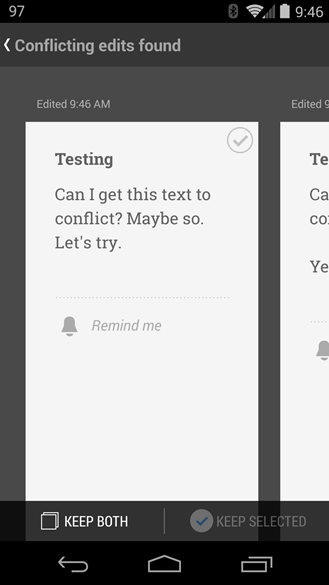 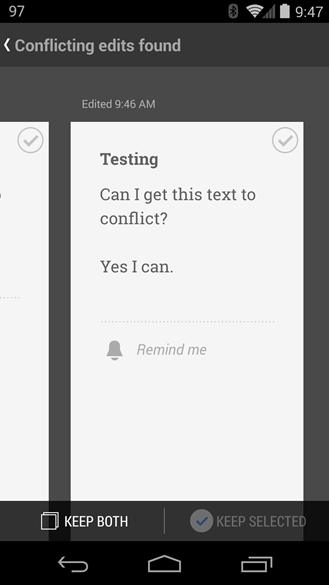 The first edit was created on my desktop, which I then opened on my smartphone before saving. I edited it on my smartphone, and upon attempting to save it, was alerted that there were conflicting edits found.