Before Ozzy Osborne became a spokesman for a butter substitute and the star of the funniest Pepsi commercial ever made, he was the lead singer for perhaps the greatest heavy metal band of all time – Black Sabbath. These guys are probably older than your parents now, but they were the cutting edge of bad (in a good way) back in the 70's and 80's.

Dark lyrical themes combined with pounding guitar and percussion-heavy tracks made these guys the kings of the counter-culture, heavy metal movement. I mean, Ozzy bit the head off a freakin' live bat once on stage. You can't get much more metal than that. What kind of cell phone would Iron Man use? Well, depending on which movie or commercial you watch, it's either an LG (the original movie), an HTC (based on Robert Downey Jr.'s nonsensical brand representation), or an impossible transparent super-sci-fi gadget phone (Iron Man 2). But the ultimate fan of Marvel's movies would definitely use the Galaxy S6 Edge Iron Man Edition, with a unique gold-on-red color scheme to match the suit. And just in case people don't get the hint, it's also got a huge Iron Man helmet decal on the back and a custom Avengers software theme.

Samsung is quite chummy with Marvel lately, and that apparently goes beyond cases and (very ugly) TouchWiz themes. The Samsung Electronics Twitter account has just posted a little teaser for an Iron Man edition Galaxy S6 Edge. That could either be really cool or really gaudy.

Samsung has teamed up with Marvel to offer a free limited edition set of 4 Avenger themed Galaxy Note 4 phone cases to anyone purchasing the latest generation Korean phablet. Samsung generously applies a $200 value to the cases, but I think that estimate is about 4-5 times too high. They look like pretty typical snap on plastic cases, but the artwork on the back featuring symbols of Thor, The Hulk, Iron Man, and Captain America does look pretty snazzy and is sure to draw nerd lust from all your friends. 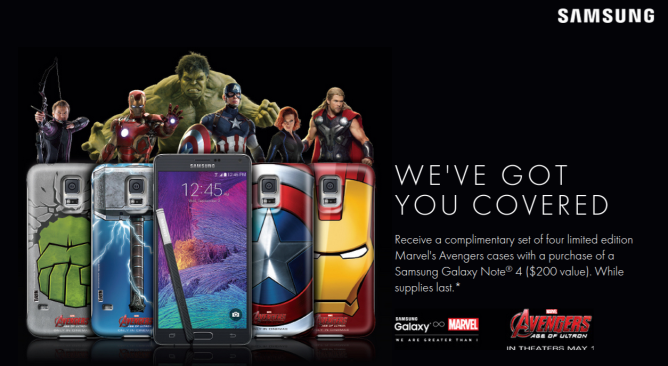 The offer is available to anyone over 18 in the US or Puerto Rico who purchases a Note 4 between May 4th and June 1st.

I had a revelation last year: when it comes to my favorite superheroes, I'm a big fan of the "normal" guys who just have lots of money and gadgets. That's not to say that Wolverine, Thor, and the like aren't complete and total badasses, but there's just something to be said for millionaire philanthropists looking for a bit of vigilante justice.

For those who may be outside the super hero loop (way outside of it), I'm referring to Batman and Iron Man. While the former's newest movie trilogy has come to close, the latter has a new film hitting theaters in roughly a week (May 3).

The gameplay trailer shows us much of how it works and it's all pretty standard fare. Gameloft has never been the developer to stray too far from the mainstream.

It's difficult to put out a $1.5 billion movie and not expect a few major product tie-ins. Marvel, today, "released" (we'll get to that in a bit) a new game for Android called "Avengers Initiative." This $7 app stars the Hulk, as the green loose cannon battles some of his most notorious villains, including Wendigo, the Abomination, and even the infamous Skrulls. The game will only be available for select Android devices to start with.

Curiously, though, despite the game being available on the Play Store, it doesn't seem to be active. There is a list of devices that will be supported (including the HTC One X, Galaxy S III, Nexus 7, and many other flagship phones and tablets), however it can't actually be installed just yet.

You have to hand it to Verizon’s marketing department – out of all of the carriers pushing Android, their ads have been the most compelling.

Verizon continues their Android advertising legacy with a departure from the ‘Droid Does’ campaign in order to use the Iron Man 2 release to pimp their latest Android phone – the LG Ally. What’s that? You haven’t heard of the Ally? What about the LG Aloha? Or, its considerably less glamorous name LG LU2300. Still nothing?

OK, forget names, let’s talk specs. You like the Snapdragon processor, right? Well, what if I told you that the Ally not only packs a 1GHz Snapdragon, but a qwerty keyboard as well?