A developer has done the (almost) unthinkable: gotten an Android Wear watch to work with an Apple iPhone. More specifically, it's a Moto 360 and an iPhone 6. Maybe more surprising is that he did not need to jailbreak the iPhone to do it, even though his happens to be. It's not exactly clear how much he needed to modify the watch, but he's obviously loaded custom software onto it. Here's a proof-of-concept video:

If you don't like videos, it shows a text message rolling in on the iPhone and an alert subsequently popping up on the Moto 360.

The HTC One is a beautiful device. At a time when most Android phones are made of plastic, HTC betted on aluminum for its flagship device. The handset just exudes style and class, but there is something it's missing. It screams premium, but it doesn't quite say ... elite. If only it were made of gold. Now that would be a quality device. While we can't expect HTC of all companies to have the visionary mindset necessary to deliver such a product, the fine folks over at Goldgenie understand class.

comScore just dropped some new U.S. market share numbers on us and if you like drama, you're going to love this one. According to the analytics company, for the three month period ending in February 2013, Android's share actually dropped 2%, while Apple's rose 3.9%. Before you panic, though, no, this isn't the end of the world. 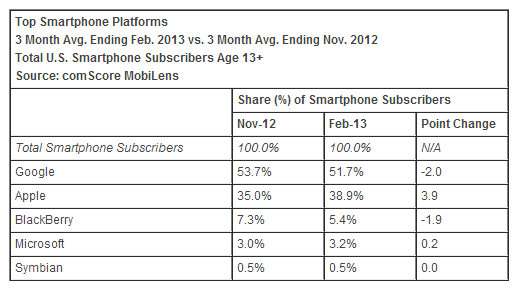 Since comScore actually gives us the total number of smartphone subscribers in the country (by its count), we can use that percentage to get an idea of just how many total users a platform gained or lost.

International trademark, patent, and copyright law is a bit of a legal minefield, and Apple has proven itself to be among the best in navigating it these last few years. But there is one exception to their otherwise impressive track record: the lucrative South American market of Brazil. While Apple iPhones have been sold in the country for years, Apple has never owned the trademark for the name. A regional phone manufacturer, Gradiente Eletronica, registered the trademark for "iphone" way back in 2000.

According to Bloomberg, Motorola Mobility has just filed a new lawsuit against Apple at the ITC. Now, ordinarily, we might not report on the filing of such a suit - especially when the complaint hasn't been made public (we have basically zero details). What makes this particular filing important, though, is that it is the first lawsuit filed by Motorola now that it is officially, 100% a part of Google.

Here in the United States, we've all been witness to an historic "second" this week (as opposed to a first) in the unified launch of the Galaxy S III, untainted by carrier modification, on all four of the major US wireless providers (Verizon, AT&T, Sprint, and T-Mobile).

Now, you'll probably say "but David, the Galaxy S III is the first smartphone to launch as the same model on all four major carriers!"

Google announced today that it will be holding a special event on Wednesday, June 6th, regarding the future of Google Maps. Anyone who knows Google knows that these products are huge for the company, ranking right up there with Gmail and Android. More importantly, however, Google Maps is very important to Google's largest competitor: Apple. Which is why, when Google announces an event for one of its last major strongholds on iOS mere days before Apple's WWDC, we take notice.