Google I/O 2020 has been fully canceled, with even the online event no longer taking place, according to a statement tweeted out by the company just earlier today. Following the shelter-in-place requirements imposed in California, Google has ultimately decided "to not to move forward with I/O in any capacity this year in order to prioritize the health of everybody who is a part of our community."

Google I/O is one of the most exciting times of the year for us tech nerds, and as we near the 2019 event, the schedule is now up for all to see. This isn't the full complement of sessions — many smaller talks and workshops will be added in due course — but it does give us a good idea of which areas Google is likely to focus on most this year. Google typically reveals details about its yearly I/O developer conference via a cryptic teaser that turns into an elaborate, interactive puzzle. This year all of that has been sidestepped, as Lawnchair developer Till Kottmann has "cheated" the answer out of Google. I/O 2019 will be at the Shoreline Amphitheater in Mountain View, CA on May 7th through the 9th. Google I/O 2018 should still be about 4 months out, but Google is ready to let you in on a few secrets. The I/O website has been updated with a little hunt for clues behind the scenes of the 2018 event. The setting uses Street View and starts in a parking lot then a reception office full of little hints and 4 locks to get through. I managed to open the first one, but I had to stop to write this article. Google I/O is but months away, so it's right about time to start organizing the trip. There's one problem: tickets. As with previous years, getting tickets is a random affair, with Google making no preference about who attends, developer or not. As such, the application period entry is from February 22 10AM PST until February 27 at 5PM PST.

I/O this year is at the Shoreline Amphitheater - the same venue as last year - in Mountain View, on May 17-19. In 2016, Google gave out sunscreen and sunblock to attendees, although I've heard numerous people grumble about it being too hot, too sunny, and not enough water supplied.

Are you developing things with Google technologies? Can you be at the Shoreline Amphitheater in Mountain View, California on May 18, 19, and 20th? Are you willing to part with $900 for a ticket to Google I/O ($300 for students)? If you answered yes to all of these questions, you might want to get over to the Google I/O site and apply for a ticket. 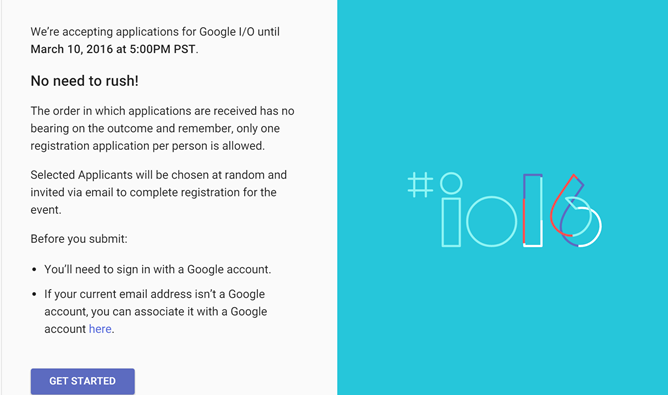 Registration opened up at 9 AM PST this morning and it will remain open until 5 PM PST on March 10th, so you've got a couple of days to get your name into the pot if this isn't a good time.

It's been a while since we last heard anything about Project Soli - Google's radical post-touch experiment unveiled at I/O - but it looks like the project is still rolling right along. According to a tipster, Google has begun notifying interested parties of an impending "Soli Alpha DevKit," asking that those notified fill out an application for the chance to receive one.

Google says it's looking for pretty much everything when it comes to possible applications - health, art, interactive installations, robotics, HCI, VR, and more are all specifically called out as fair game in Google's email.

The email says that those selected to receive a DevKit will get a development board and SDK, along with the opportunity to participate in a Soli Alpha developer workshop at some point in the future.