We've all seen, probably many times, the common situation where you click a link on your Android device and you are then asked with which app you would like to open it. On one hand, this is a great feature; merely guessing could be very annoying and it is a sensible way to allow users to assign default apps. Sometimes, though, certain types of links should always open in a particular app without prompting the user. 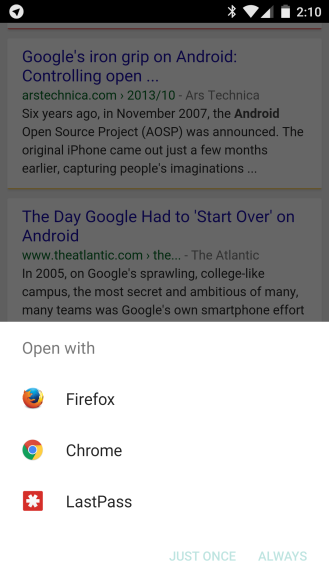 A new addition to Android M, as discussed at I/O today, will allow that to happen. Developers can add an "autoVerify" attribute to their app manifest to tell the operating system that there is no need to prompt the user for certain types of links. A while back, Apple got to announce exclusive access to HBO's standalone application called Now that lets users watch content without a pre-existing subscription to the service. Of course we were all jealous, but today, that jealousy ends. Sundar Pichai just announced at Google I/O 2015 that HBO Now will be available on Android "across all devices."

That last bit is pretty important, because that means Android phones, tablets, and Android TV - just like how the service was released for Apple devices.

Unfortunately, there's no word as to when Now will hit the Store (but I would look for it soon).

A new report from Bloomberg claims that Google is in the final stages of prepping its new online photo tool, which has been rumored for months. Importantly, this tool would not be built into the Google+ website or app as the current Photos client is. Let's skip the part where we predict the downfall of Google+ and talk about what this really means.

Google I/O 2015 is drawing ever closer, and that means it's time to start lining things up for the big event. As tradition dictates, Google is working on a fresh update to the Google I/O app. We've now got a beta release of the app, which just started rolling out to a small group of people who signed up last year. The changes aren't too elaborate, but they do some visual refinement and a few adjustments to the feature set. There are even a couple tidbits to learn from a quick teardown. The official schedule for this year's Google I/O recently went live, and we're poring over the upcoming events with eager excitement. As one commenter was quick to point out, it looks like Android M will make an appearance at this year's conference. There's a direct mention under the Android for Work event scheduled for 2:30 PM PST on the 28th.

The presence of a What's New in Android session (1:00 PM) is also a tip-off. Google usually uses takes this opportunity to discuss what's debuting in the freshly unveiled version of Android.

This is the month of Google I/O, with the event set to take place from the 27th to the 29th. Eager conference goers and stay-at-home-live-streamers alike can now start planning those days out, because the official schedule has made its way online.

The page provides a general overview under the Agenda tab, but you can select other options to get a detailed list of what will take place each day. The most exciting event, the keynote, is scheduled for 9:30AM PST on the 28th.

What's New in Android will come later that day at 1 PM. It usually refers to a new version of Android, which are sometimes unveiled at Google I/O.