Today is the Galaxy Note 10's official release date, with "pre-order" flipping over to "buy" at most websites. With the formal release, many of the early promotional offers are gone, though you can still snag up to $600 off with a recent trade-in via Samsung, and some carriers are still running their own discounts and trade-in programs. While in-store retailer and carrier availability may vary, the Note10 is now available and listed as "in stock" in most places. LG announced the V30S ThinQ—more or less a V30 with extra RAM—at Mobile World Congress in February. The phone went up for pre-order a couple of weeks ago for the plainly silly price of $929.99, but promptly dropped to a more reasonable $729.99. It's now in stock at B&H at that price. Living in Europe and being able to easily buy a Nexus device have traditionally been mutually exclusive. With the possible exception of a couple of countries, getting your hands on a Nexus in Europe usually meant having to jump through a million hoops and deal with a very limited availability. Compounded with the fact that basically every other Nexus launch to date has been a fiasco in one way or another, you could count yourself lucky if you managed to grab one in time for Christmas.

Fortunately, Nexus manufacturers and Google have learned from their mistakes, and things have improved greatly compared to previous years. As a whole, preorders in the US went swimmingly, and today — barely a month after the US launch — the Nexus 5X is available to order in Europe. The black leather Moto 360 is currently up on the U.S. Play Store, though it probably won't last long. After going out of stock pretty much immediately at launch several days ago, it is already listed as shipping September 22nd, a full two weeks from now. The gray leather variant remains out of stock.

The Moto 360 has been in high demand, though some early reviews indicate poor performance and battery life, especially with the ambient display setting turned on (we're talking having trouble getting through a single day without recharging).

Just a quick note for those who have been pining after the more capacious of the white Nexuses: it's back. After a couple of days absence from the Google Play Store, customers in the United States can now order a white Nexus 4 for the low, low price of $349. It even includes the white bumper accessory, just so you won't forget that you've got the lily white version of the phone when you're looking at its all-black screen and bezel.

As usual, the phone is shipping in 1-2 business days. The 8GB white Nexus 4 is still there too, bumper and all, in case you want to save a bit of dough on its $299 price.

Months after the worldwide release, the Nexus 4 is still in short supply in nearly every market around the globe. If you're in Australia or Spain (and reading this on Tuesday) you might have a shot at grabbing the world's most elusive Android phone. The local editions of the Play Store are currently showing the Nexus 4 in stock in both 8GB and 16GB flavors. 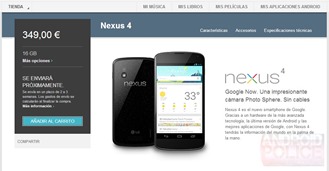 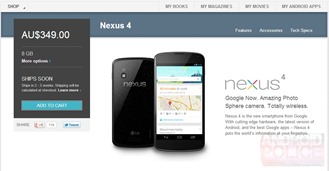 The last time that the Nexus 4 was available in both these countries, the supply dwindled almost immediately - according to commenters, Spanish supplies were depleted in an eye-popping ten minutes. If you're reading this in las horas de la madrugada in Europe or early arvo down under, you'd better hurry and get your order in as soon as possible.

Australians on the prowl for the Nexus 4, your time has finally come. You were last, after U.S., Canada, Germany, Spain, France, and UK, but who's holding grudges? Just like our tipster indicated, both the 8GB and the 16GB Nexus 4s are on sale on the Play Store as of a few minutes ago. The Bumper, unfortunately, seems to be out, but that's a minor niggle in the grand scheme of things. 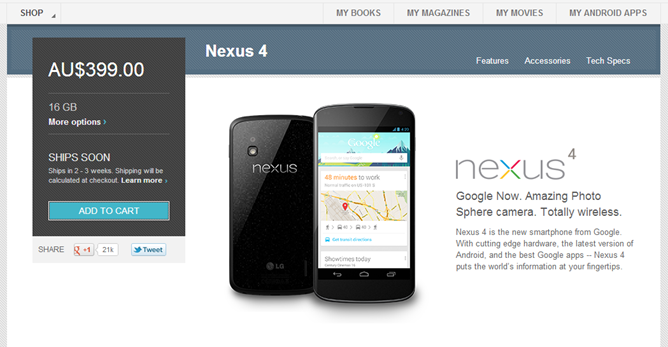