Until today, I had no idea Yahoo Messenger even existed. But it most certainly exists, and if you happen to use it, you might be excited to learn you can now send video. The iOS and Android apps now support sending video, up to one minute long, in both one-on-one and group conversations.

Yahoo Messenger is pretty much your average messaging client, but there are some neat features. You can "unsend" messages and media in a conversation, it supports Google TalkBack, and there's even a native client for Windows and Mac. Which Hangouts still doesn't have, after all these years. We first heard of Skype's new Mojis a couple of weeks ago with the announcement of version 6.2, but the animated clips were nowhere to be found back then. They promised an integrated way to search for famous clips from TV shows and movies that you insert into your conversations to make them funner. Well, Mojis are finally live in version 6.4 of Skype, and they're being accompanied with a more functional feature for Android Wear users.

This new update adds full support for your smartwatch, letting you receive notifications of messages and calls on your watch and reply with voice dictation, preset messages, or by drawing emojis. Hangouts does some things well, but letting you know when someone new is trying to contact you is not one of them. Google is rolling out several new invitation options to Hangouts that will make things much clearer. What's more, it looks like they're already live in the Android app.

The Skype app was updated today with a few small, but welcome, tweaks to make its instant messaging service a better experience on Android. The biggest enhancement is the addition of a typing indicator that shows when other parties are composing a message. This element is pretty common in instant messaging applications, and Skype users I'm sure will welcome the new feature. Another small improvement is that the avatar picture will now move alongside longer messages as you scroll down the page making it easier to track who said what in a multiperson conversation. 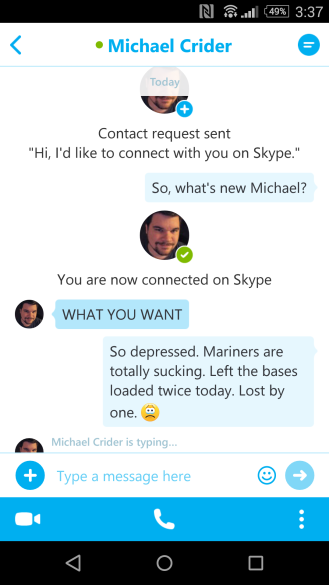 The other changes present in Skype 5.4 are all pretty minor.

Today, both of Facebook's current apps have been updated to prepare for the arrival of Facebook Home. The main app merely added an extra permission that Home will eventually use. However, the real fun came to Messenger, which now has the ability to pop out Chat Heads, regardless of if you're using the replacement launcher. 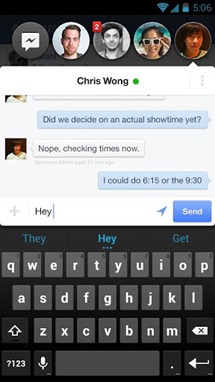 As you may recall from the Facebook Home launch event, chat heads are little bubbles that float over whatever you're doing and allow you to jump straight into a conversation no matter where you are in the OS. Just tap your friend's face and an IM window appears.

We've been seeing leak after leak about Google's rumored unified messaging service. Now, as more details get seemingly confirmed and and we even get a look at the possibly near-finished app, clearly this is the time for Google to acquire a competing IM service, right? Well, not so much, according to AllThingsD. As it turns out, Mountain View is not about to buy WhatsApp, a company that makes a product that Google is currently nearly done building itself. Just in case you were wondering.

This contradicts rumors that WhatsApp would be selling to Google for close to $1 billion.

Alright, Google. It's time to stop leaving your VoIP service to languish on the vine. Facebook has released a double-whammy of big news bits. For starters, today the social network is rolling out an update to its Messenger app that will allow users to send each other short, recorded audio clips. It's voicemail for the 21st century, if such a thing can even exist without being horrible. And, really, this sounds like it's not. 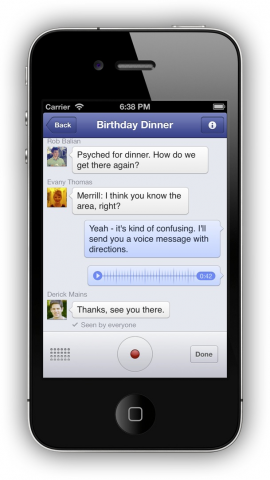 Perhaps more interestingly, though, is that Facebook is also testing free VoIP calling in Canada right now. This is a huge deal, as it competes directly with Google Talk.

Social butterflies have been enjoying SHAPE Services’ maxed-out instant messaging application IM+ Pro since last year, but the privilege certainly came with a price – it cost $9.99. Recently, however, SHAPE dropped the price to just $0.99, considerably increasing the app’s value.

As a reminder, here’s what IM+ Pro is capable of: 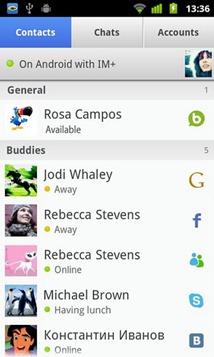 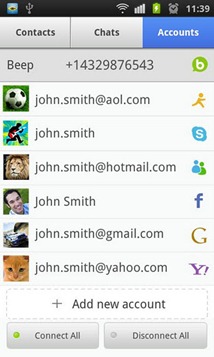 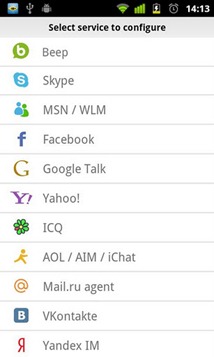 As of yet, we have no idea as to how long this sale will last, so if you’re interested, you might as well pick it up now. All the information you’ll need is provided below. Cerulean Studios, creator of the popular cross-platform IM client Trillian, recently announced that all versions of the aforementioned product would transition to a free-with-ads model, as opposed to a paid download. Even though this change took place about a week ago, it looks like the Market listing has finally been updated to reflect accordingly.

Users are still able to subscribe to a paid service that is ad-free and adds new features, like the ability to view chat histories online. Users who've paid in the past will have their purchases honored, and will be able to transfer them over to other platforms.