Some of you may not know this about me, but I spent most of my childhood as a competitive swimmer. To this day, I am convinced it is one of the best workouts you can possibly do — it not only requires muscular and cardiovascular strength, but an acute awareness of your body and mental focus. So along comes The Imagination Factory to assist with the latter part with SwimAR, a heads-up display for swimming goggles. To celebrate the beginning of the pro cycling season (starting with the Tour Down Under in Australia) Recon, maker of HUD devices for athletes, is offering $100 off any of its HUD offerings.

Readers may remember Recon for Jet, the heads-up glasses that run Jelly Bean and compete against the still nascent Google Glass for the hearts and minds of athletes. The glasses debuted last Spring, with "Pilot Edition" units going up for pre-order last June. The current batch of Jet headsets is currently on a first-come, first-serve basis with units expected to ship out in "Spring," though no specific time frame is offered by the company's website.

Heads up, Google, Glass is about to get some serious competition. Recon Instruments, a Canadian technology company known for athlete-focused heads-up display products, is looking to expand into general-purpose HUD technology. The company's prototype device - dubbed Jet - was officially unveiled today, and Recon Instruments hopes to release a retail product by the end of this year. 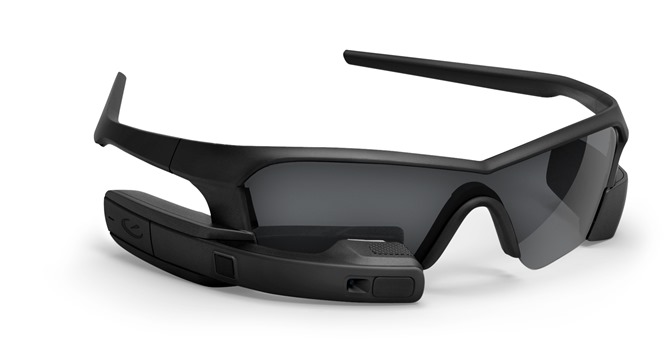 At first glance, the Jet looks like little more than a pair of sunglasses with an attached LCD screen; you won't be mistaking Recon Instrument's HUD for Google's anytime soon. On closer inspection, though, the Jet has promise. Boasting a dual-core CPU, HD camera, GPS, Bluetooth 4.0, ANT+ and a myriad of sensors, Recon Instrument's glasses look to account for every augmented reality scenario imaginable.

It's not quite enough, though, to allay our reservations. For starters, the glasses, while not particularly gaudy and actually somewhat stylish, seem to only have one tiny lens hovering over a small portion of the right eye.

The glasses, which are supposedly under development at Google's not-so-secret Google X lab, would cost about as much as a smartphone, so they likely won't be for the light wallet. That being said, if they work as advertised, they could still sell plenty.