Read More
Update: Well, what do you know -- Verizon just updated the support documentation for the Tbolt to reflect the newest build... and it just so happens to be 2.11.605.5. Yep, the exact same as this build. Looks like this is the official OTA, folks. Check out the full changelog here.

Thunderbolt owners have been waiting a long while to get Gingerbread -- too long, considering this phone was once Verizon's flagship. We've seen several leaked builds come around, all of which experienced a variety of problems. The most recent leak seemed to be the most stable so far, but it was still chock-full of annoying little bugs.

At the beginning of the month, HTC announced that it would be bringing Gingerbread to the Droid Incredible and ThunderBolt. While that promised has been fulfilled for the former, there's been nary a word of the status of the update for the latter. Until now.

Thanks to our anonymous tipster known only as Pig Benis, we have an official Gingerbread RUU hot of the presses for the HTC ThunderBolt.

Our tipster isn't positive if this is the final build or not, but considering it's so close to the end of the month, it is very likely.
Using this RUU will wipe all data on your device!
Read More

Finally! The long awaited Gingerbread update for both the Droid Incredible and ThunderBolt will be hitting the airwaves in September, according to HTC's official Twitter.

While several leaked Android 2.3.x builds for each device have surfaced over the past few months, none of them were deemed good enough to achieve "official" status, so it's good to know that HTC has finally put the finishing touches on each.

No solid date has been set, so just know that your waiting will finally come to an end within the next few weeks.

If you've been considering making the jump to Verizon's ultra-fast 4G LTE network, then I can think of no better time to make that commitment than now, as you can score the HTC ThunderBolt for one cent from Amazon Wireless. Like always, signing up with Big Red for two years is a requisite to get that price, but it still saves you $250 over the retail front.

So, how's that for exciting news, TBolt owners? Since HTC clearly missed the Q2 update window that was originally announced, they moved it to the next logical choice... Q3. That's probably the best decision, especially when you consider the fact that we're already well into Q3.

The official word, per an HTC representative:

We are excited to announce that the HTC Thunderbolt will receive the Gingerbread (Android 2.3) update in Q3 2011. Stay tuned for details as we get closer to the update availability…

As you can see, no solid date has been confirmed as of yet -- but at least now you know that Gingerbread should be hitting your device sometime within the next two months.

Are you looking to get in on some of the 4G action that's going around nowadays? If you've been holding off in search of a cheaper deal, then you may want to take a look at this latest offer for the HTC Thunderbolt from Wirefly.

If you purchase the Thunderbolt with a new Verizon account, you can get a taste of the carrier's first 4G device for just $59.99 - almost half the price of the previous deal we saw a couple of weeks ago. Despite the fact that the Thunderbolt still runs Froyo, this is a great deal for those of you yet to buy in to 4G handsets.

While that still leaves plenty of Android users out in the cold, this is still a step in the right direction, especially with the addition of the ever-popular EVO 4G. If you're lucky enough to have your device on the supported list, head on over to the market to try it out.

It's no secret that there's an update coming to the HTC Thunderbolt that should start tonight - but no one likes to wait, so - thanks to TeamAndIRC - we've got you covered with an exclusive download.

This update brings a number of fixes to the Thunderbolt, including the annoying reboot issue. Other notable fixes: 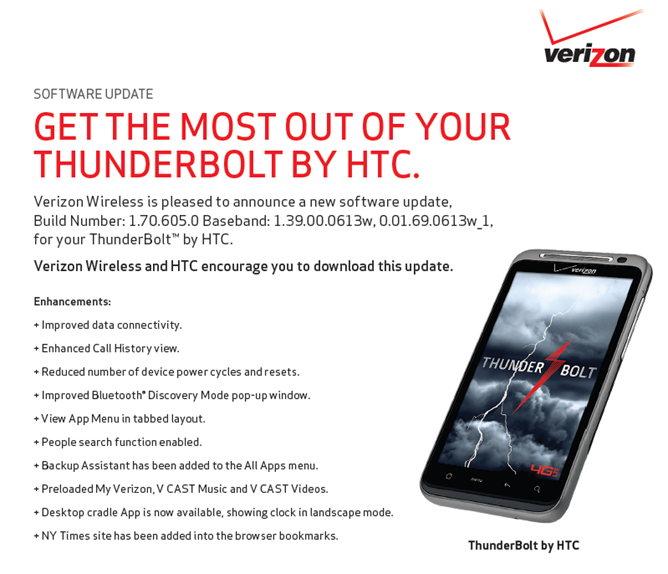 Stay tuned - this is a multi-part "Deal Alert," everyone. First on our list: the HTC Thunderbolt. If you open a new Verizon account (sorry, additional lines and renewals aren't eligible) today, you can pick up an HTC Thunderbolt from Wirefly for just $100. Not shabby. The Thunderbolt was Verizon's debut 4G LTE device, and it has enjoyed substantial popularity since launch. It's also probably the best 4G handset on Verizon presently, though its battery life and lack of a Gingerbread update have put off many owners. 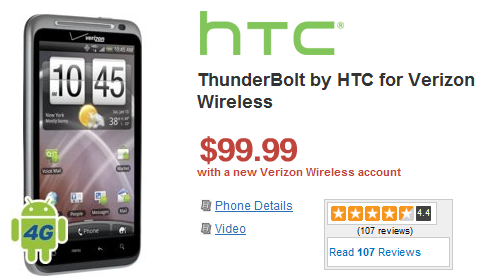