Chalk this one up under the 'lame' category: looks like the T-Mobile G2's CPU ticks along at just 800 MHz. In a world of 1+ GHz smart phones, that's definitely something of a letdown.

A slower clock speed doesn't always equate to lesser performance - but without any solid previous benchmarks to illustrate what this new(er) CPU is really capable of, it's hard to say whether this is going to be nearly as adequate as T-Mobile claims.

Just like the title says: some real, live shots of the T-Mobile G2 out in the real world have landed in Engadget’s lap. Based on the photos, it looks like the earlier leaked renders were pretty accurate, albeit the colors were off. It’s not a bad looking piece of kit, though it is does look a bit utilitarian. In fact, it looks like what I’d imagine the Nexus Two to look like.

It seems appropriate since the G1, the phone that kicked off the Android revolution, was killed off a few weeks ago, and since T-Mobile is about to introduce their first HSPA+ capable device, that they would call this device the G2. Well, after countless rumors about a G2 (starting a few hours after the G1's launch), the device has finally been announced on T-Mobile's HSPA+ site. 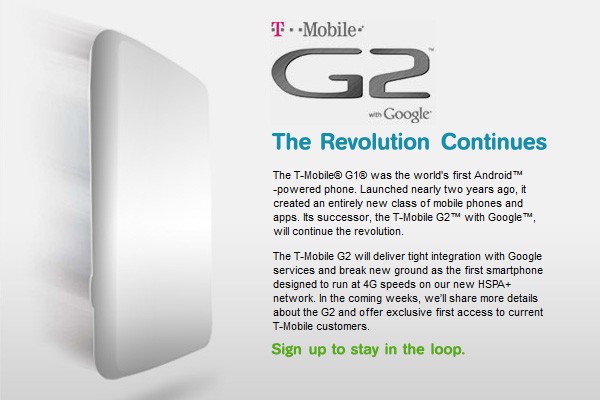 That's right, the G2 is official, will be the first phone to utilize T-Mobile's 4G-like HSPA+ network, and will have its specs handed out to the media and a select group of people "over the coming weeks." These are exciting times ahead of us, folks, so stay tuned to Android Police for lots more coverage on the G2 and other upcoming Android devices. 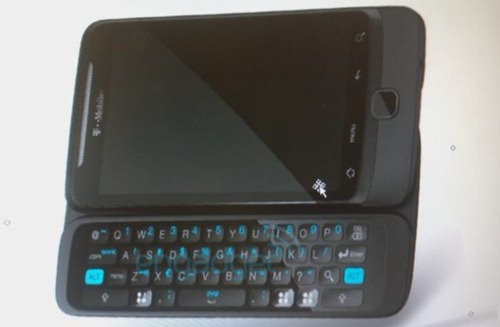 A few days ago, we found a couple of blurrycam pictures of the HTC Vision. Yesterday, a blurrycam shot of T-Mobile’s roadmap leaked, and it shows an HTC Vanguard releasing on September 9. Now, Engadget has word that the HTC Vision is launching in September – the same time the HTC Vanguard is shown launching on T-Mob’s roadmap. The Vision will be T-Mobile’s first HSPA+ phone. (As I’ve mentioned before, HSPA+ is pretty awesomely fast, and expanding like the wind.) The specs are rumored to include a 3.7” screen, slide-out 4 row QWERTY keyboard, Android 2.1 with sense, and a 1 Ghz processor.