There are a few rugged smartphones on the market, like the Galaxy Active series or the LG X Venture. But maybe those aren't tough enough for you. Do you need a phone that will survive "fields, underwater and other outdoor environments"? What about one that is "manly, strong, and special in market"? If so, the Doogee S60 might be for you. If you're a Game Of Thrones fan, you're likely well aware of the "hold the door" meme that has transfixed a good portion of the internet for the last couple of weeks. Kickstarter, too, it seems, is engrossed with the series' doorstopper of a storyline, as their latest changelog takes "Bug fixes and performance improvements" to a whole new level.

In the highly anticipated 5th season of Game of Thrones, Hodor will be noticeably absent. Now we know why. According to the appendices of George R.R. Martin's masterpiece, Hodor has been busy learning Android development.

Because a keyboard is no longer enough, Hodor has been hard at work on a calculator app (presumably because Lannisters are still counting their debts on abaci). Unfortunately, the gentle giant is about as good at math as he is quoting Shakespeare. 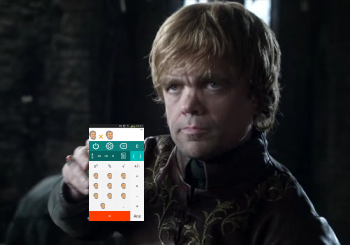 Perhaps we shouldn't rush to judgment, though. Maybe if we could understand poor Walder, we'd learn a thing or two about math.

With that out of the way, you no longer need iOS 8 to enjoy the best keyboard on Android a Game of Thrones fan could wish for.