The ability to handwrite on a smartphone may be a godsend whenever you're trying to look up something in a foreign language. But for whatever reason you use that feature, it's important that your phone knows what you're trying to say. Google has a keyboard app dedicated for handwriting input that officially supports 97 languages. But with the latest update to Gboard, which introduces handwriting support for "more than 200 languages," that other app may have just been made obsolete.

As Cyber Monday was wearing down, Google was already winding up some app updates. A new version of Gboard began rolling out late in the afternoon, and with it comes the long-anticipated handwriting support, meaning we can finally uninstall the separate handwriting keyboard. There are also some tweaks to the emoji picker. As we look to the teardown, there are signs of a new theme system with a few new options for more visual control, a new autospace feature, integration with the Motion Stills app, and more.

Google debuted Android Wear 2.0 at Google I/O last year with a number of great new features, not least of which was a clever spin on the handwriting keyboard. Oddly, the handwriting keyboard was left buried in a hard to find location and had to be activated just to use it. Now that the official Wear 2.0 release is rolling out (kinda), users have reported that this keyboard didn't even come preinstalled, nor could it be found on the Play Store – at least, not until yesterday. The Handwriting Keyboard is now available.

A new version of Gboard hit the stage late Wednesday night, and this one is absolutely packed with great improvements. The toolbar is now configurable, making space for an entirely new tool for editing text and navigating the cursor. One-handed mode now allows for resizing and positioning the keyboard. There's also a stack of newly supported languages from Assamese to Waray. The teardown isn't empty either, as there are signs Google may be planning to merge in the Handwriting keyboard and introduce an Incognito Mode.

If typing is too much effort for you or you don't enjoy pecking at small buttons on your screen, then you might enjoy the art of handwriting a lot more. And in that case, you're probably using Google Handwriting Input (or a similar keyboard) to satisfy all your scribbling needs.

After adding a few languages in its 1.5 update, the app is now receiving more of them in version 1.7 and improving support for several existing languages. The new additions are: Corsican, Hawaiian, Kazakh, Luxembourgish, Samoan, Scottish Gaelic, Shona, Tajik, Uzbek, and Western Frisian.

The app also now supports Android N so you can install it on your Nexus devices if you're running a developer preview build, and has more emojis. After Google released the Android Wear 2.0 Preview images for the Huawei Watch and LG Watch Urbane 2nd Edition, many of us quickly flashed the firmware onto our watches to test out the new features. Most of the major changes are pretty easy to find, and some could even be said to be a little in-your-face. However, we saw quite a few people were confused by what seemed to be the absence of the handwriting keyboard. It turns out that it's just not enabled by default on the preview firmware. While it's not exactly buried, knowing that it has to be activated and where to go isn't very intuitive; so we've made a quick how-to guide for those that got a little lost. Google's Handwriting Input got its independent Play Store listing back in April and has since received very few updates. That's why the latest version bump to 1.5 (and the subsequent 1.5.1 release) seemed to be significant and in fact, it added 5 new languages to the list of existing 82 languages. These are Arabic, Persian, Urdu, Hebrew, and Burmese.

You will have to download language packages if you choose any of these input methods inside the app, but once that's done and enabled, you will be able to scribble on your screen in your language of choice and Handwriting Input will convert that into text in any app. 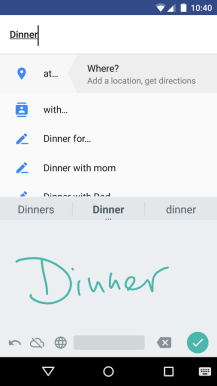 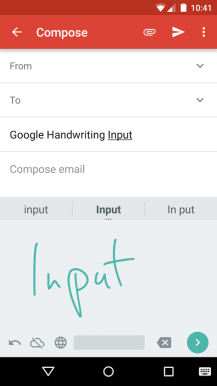 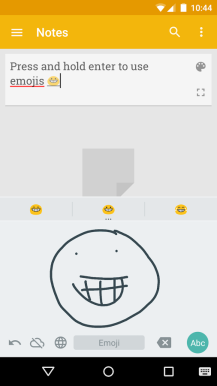