In a move that will certainly irritate many people, ViewSonic has taken to its Facebook page with an official word on the gTablet, future support, and whether or not it will ever officially see Honeycomb. As you may have already guessed, the simple answer from ViewSonic to the latter is "no," with very little reasoning behind the decision.

The ViewSonic gTablet was one of the first Android tablets to hit the market with the NVIDIA Tegra 2 chipset onboard, but at the time of release it was powered by Android 2.2, as 3.0 had yet to hit the market.

It looks like eBay's Daily Deals feature may become the go-to source for Android tablet shopping - just last week they had the Motorola XOOM Wi-Fi for $100 off, and today, the Viewsonic gTablet has found its way onto the site for a mere $250 with free shipping. 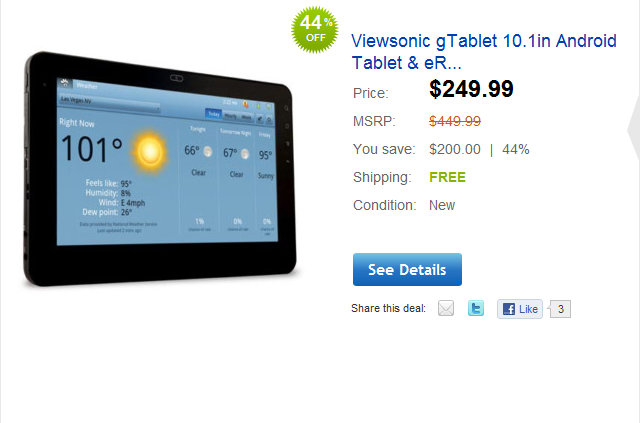 This isn't the first time that the gTablet has made its way into our deals category, either - we've actually featured it a few different times when it was on Woot.