For Google Talk users, Product Manager Mayur Kamat has some good news and some bad news. The bad news is that the chat service's desktop client for Windows will be deprecated on February 23, 2015 as the team continues to focus on making Hangouts better.

Of course that leaves the question of third-party clients like Pidgin, Trillian, etc. The good news is, as Kamat notes, that compatible apps will still continue to work.

If you’re not ready to make the switch to Hangouts quite yet, you can continue using Google Talk on Windows with a range of compatible third-party chat apps (http://goo.gl/FSbCX5). Please keep in mind these aren’t Google products, so exercise caution when signing in with your Google account.

Users of Google Voice have long called for the company to pay more attention to the seemingly forgotten service for quite some time. Unfortunately, they may be getting more than they were hoping for. While many people are thrilled to hear Voice will finally support MMS and become a part of Hangouts in early 2014, Google is also planning to close up shop for all 3rd-party apps that relied on the service for free texting and VoIP calling. Sadly, these apps will cease to function on May 15, 2014.

The coveted update may take a while to reach you, considering it hasn't even started officially rolling yet. Luckily, we have the APK from the Nexus 5 factory image you can download and safely install manually.

Google may've said during Wednesday's keynote that it planned to roll out Hangouts to Gmail users gradually, but if you just can't wait to integrate the new messaging service into your e-mail dashboard, there's a way to gain early access. Simply log into Gmail, ensure you've signed into Google Talk (if you're having trouble enabling Talk, try installing the browser plugin), click on the thumbnail associated with your account in the Talk sidebar, and select the "Try the new Hangouts" option.

If you don't see the option right now, you can trick Gmail into giving up the goods by clearing your cache and cookies.

What Hangouts does have going for it is that it is really pretty. It supports group messaging, pictures, video chat, and even has read receipts! Hangouts completely replaces Google Talk, so if you have a fondness for the past, say your goodbyes before you update. Let's take a look: 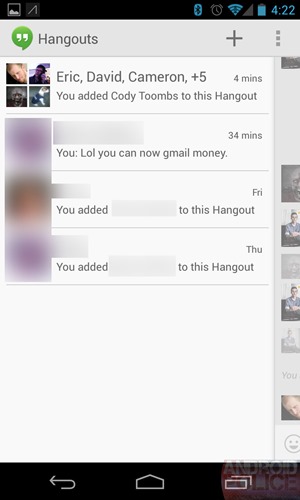 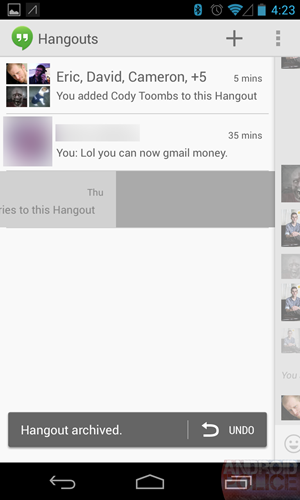 This is the "front page" of Hangouts.

A few months ago I wrote "Stock Android Isn't Perfect," an article where I turned my usual harsh UX critique on stock Android, instead of just picking on TouchWiz and Sense all the time in my reviews. The article went over pretty well, and even got a few responses from Googlers! I didn't cover everything that was wrong with Android, though, and there have been a bunch of updates since the original article, so it's about time I wrote a sequel.

So we're officially making this a series now, and it'll serve two purposes: One, there's a new version of Android out, and more things to complain about; and two, to give credit where it's due, because, since I wrote that article, a lot of things have been fixed.

Google Talk is one of my favorite parts about Android. If you have other Googly friends, between Android, Gmail, and G+, they are almost always available. In Android 2.3.4, Google Talk got a big upgrade in the form of voice and video chat.

There will be many similarities to the to the Ice Cream Sandwich version of Gmail, which was the subject of Part 1 of this series. So go read about it or risk falling behind the rest of the class. Just like that article, Gingerbread is on the left, Ice Cream Sandwich is on the right. The ICS pictures are all from the emulator, which has the occasional rendering issue, so don't judge too harshly.