Whether the Google Seattle team is just saddened by the loss of a few dear old services or in the mood for a spooky Halloween season is up for debate, but on its campus, a cemetery of old, dead Google products has popped up. Rather than induce shivers of fear in onlookers, it probably triggers nostalgia and sadness.

Even though Google Reader has long been dead, many of the tools that remained in its wake are still going strong, and the way that most users utilized the tool has gone largely unchanged. The conversion to Feedly was a rather smooth one in my opinion, and integration with some of my favorite apps, like gReader, has been flawless.

Today, gReader received a rather significant update to version 3.7, which brings about many new changes and improvements, including a pair of new themes, custom notifications, better shortcut management, and several others. Here's a look at the full changelog:

If you're already a gReader user, head into the Play Store to grab the update.

We’re coming up on the 6-month anniversary of the shutdown of Google Reader; and while some people might still be a little jaded about losing the beloved service, most have moved on to one of the many alternatives that popped up to replace it. Several great feed aggregators exist, many offering innovative improvements over Reader, but their mobile apps may not fit your needs. The developer of gReader, noinnion, intends to solve that with the release of News+, a feature-rich and very customizable news reader app with support for several services. 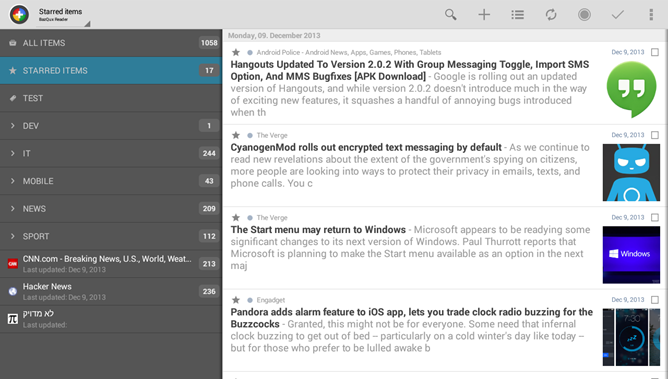 Development on News+ started over 6 months ago, around the same time gReader added support for Feedly.

Feedly has been doing its best Google Reader impression in recent months, but now it's adding in something Google forgot to do. Mainly, the business model. Feedly will be making money on its new cloud synced RSS reader with a $5 per month subscription for Pro features. Interested parties can also drop $45 for a whole year of Feedly Pro. But the deal the company is running right now is something special. For $99 you get immediate access to Feedly Pro forever. This is limited to only 5,000 spots.

Update #1: HTTPS will be the first feature to go free "when the next batch of feedly pro is available," according to this post on Feedly's blog.

As you're reading this, the world is about to change. After years of faithful service, Google Reader is about to cease operation. Ever since the announcement was made services like Feedly have been revving up to take its place. The Old Reader is another alternative that doesn't get as much attention, but it's got some admirers. The uber-popular RSS reader app gReader has just been updated with support for The Old Reader to help ease the transition. 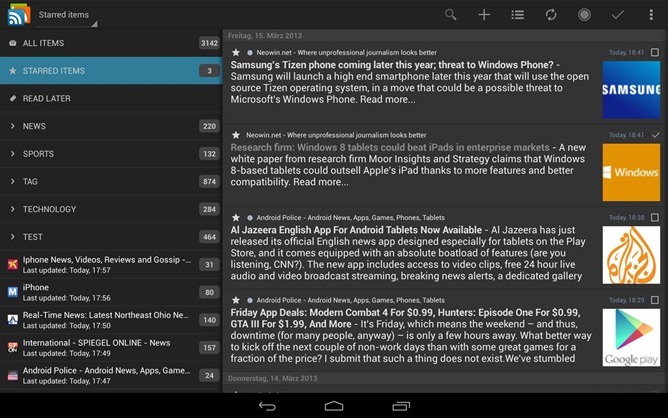 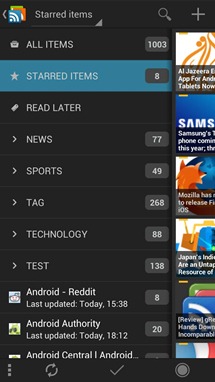 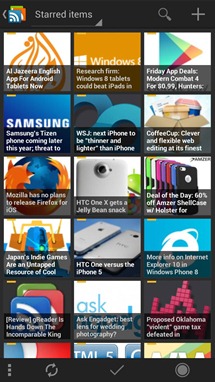 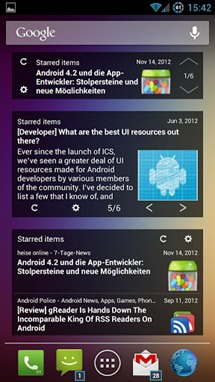 Four days. Four days, fellow Google Reader pilgrims: that's how long you've got until Google turns its back on the RSS service forever. Apps that used to rely on Google Reader as a backend have switched to alternatives, usually Feedly's new and almost identical backend API. Popular podcast manager/player BeyondPod is the latest to do so, but in order to try it out, you'll have to leave the comforting confines of the Google Play Store for the treacherous waters of a non-Market Beta. 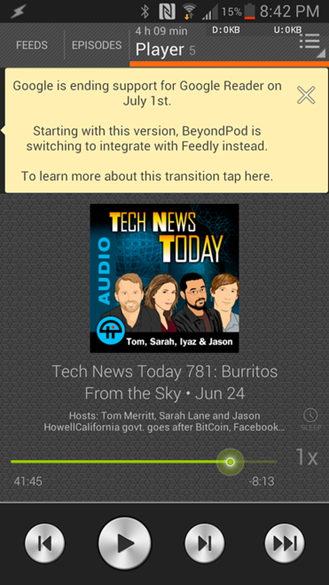 You can download the latest BeyondPod beta (version 3.1.31) for smartphones here. The tablet version is a separate app, and the beta (with Feedly syncing) is downloadable here.

The old maxim "change or die" would seem to apply to apps and services left in the wake of Google Reader's upcoming shutdown. Popular RSS client GoodNews is exiting the Play Store, stage right, once Google Reader shuffles off the mortal coil on July 1st. The developer updated the Play Store description and the app's website with the news. Since Google Reader will not be functioning at all, this isn't your normal end-of-life app situation - development will cease, the GoodNews listing will disappear, the fat lady will sing. 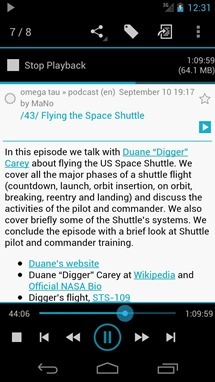 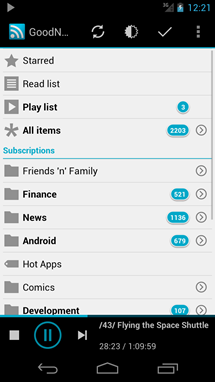 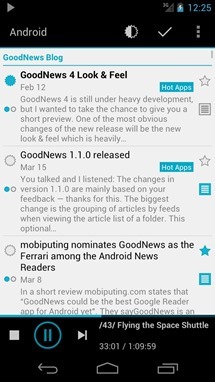 But if you'll pardon the pun, there's good news coming out of the popular reader's demise.

Well, that didn't take long. Feedly just announced its new Google-free back end this morning, and two of the top RSS apps in Google Play have been updated to support it. We might make it through the demise of Google Reader after all. 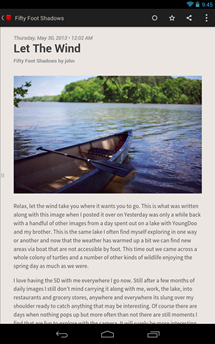 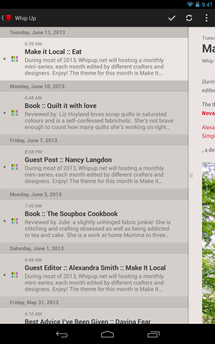 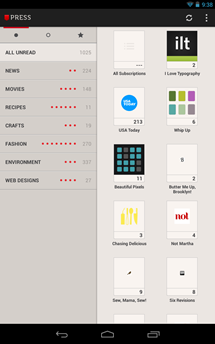 As the planned retirement of Google Reader grows ever closer, Feedly has updated us on what it's doing to ease the transition to its replacement service. Today, the Feedly Cloud is live for all users. This will serve as the new framework to pick up the slack when Google's venerable service goes away. 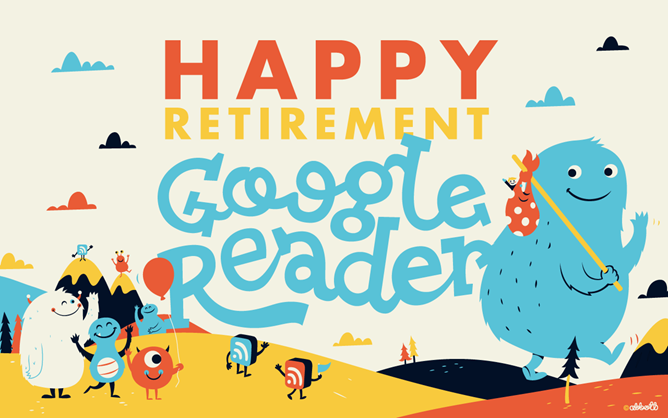 In addition to the Feedly Cloud, there is a totally new web-based interface for reading your RSS. No plugins or browser extensions are needed. This was a missing piece for a great many users. The Feedly app partnerships are also being strengthened, and will soon be moving over to the Feedly back end.

In exactly two weeks, the bell will toll for Google Reader, taking down the infrastructure for quite a few popular RSS reader clients with it. But a few are sticking it out, including the developer of popular Android Google Reader client gReader. Noin Nion has decided to expand the basics of gReader into a new app, tentatively titled News+. The new app will add support for extensions synced to external multiple external sources, including Feedly; gReader is one of the launch partners for Feedly's new alternative backend. 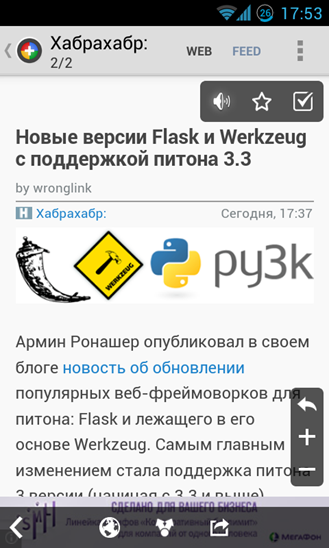 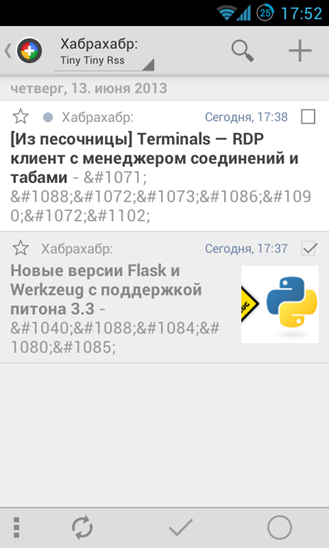 But that's not all.