Google asserts that over 97% of mobile shoppers abandon their shopping carts because the process simply makes them jump through too many hoops. To free Android users from this heavy burden, Google has launched a new Google Wallet Instant Buy API that will allow mobile shoppers in Android apps to check out in as little as two clicks. No more poking out lengthy street address and re-looking up credit card information.

We just received an email from Android Market Support letting us know that Google Checkout will be down for scheduled maintenance from 4:00 PM to 5:00 PM PDT today. During this outage, you will still be able to see paid apps in the Market, but you won't be able to buy anything. So... if you were planning on dropping hundreds of dollars in the Market during the aforementioned hours today, you should probably get started a bit early...

On December 4th, Google user judez reported on the Android Market support forum that for six hours straight, all of his Android Market sales were showing up as "payment declined." The issue continued through December 5th and 6th with over one hundred responses from other developers. Other threads were started reporting the same issue as well.  Take a look at the problem: 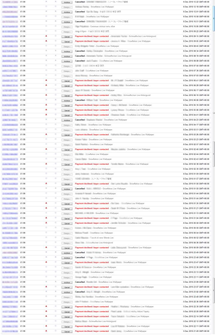 The screenshot, posted by khriskooper on the second page of that thread, shows just how ridiculous the issue became.

According to news website TheStreet, Google may be finally relenting on the Google Checkout-only system currently employed in the Android Market by letting PayPal in on the action. This is a facility that users have demanded for some time, and the ubiquity and convenience of PayPal payment should be a nice incentive for people to buy apps if they have not done so before. TheStreet also speculates that this new payment option may be the final piece of the puzzle in the long-awaited Google Music project, allowing for seamless payment from your device or PC.