Ads on the web come in all shapes and sizes. Google introduced the aptly named "link ads" back around 2007, but tastes evolve over time. Now Google is moving on in favor of something more modern, so say your goodbyes — link ads are soon to be a thing of the past. Google AdSense is the most popular ad platform on the web, but the Android app was last updated in 2017. There's a reason for that — Google wants to replace both it and the iOS app with a cross-platform web application. Now the new mobile site is here, so business owners (or YouTube vloggers) can check their earnings on the go.

Google AdSense is the largest web advertising platform in existence, and it's what powers ads on almost every website out there. The Android and iOS apps have offered a way to quickly check earnings and other data while on the go, but now Google is shuttering them in favor of the mobile web app.

Google announced in May that they were going to remove Argentina from the list of regions supporting paid apps in the Google Play Store, but they then issued a temporary reversal in June. Now Google has come up with a permanent solution for those who rely on app sales as a source of revenue. Argentinian developers can continue to offer paid apps on Google Play by receiving wire transfer payments through Google Wallet. Typically developers receive money via Google AdSense, and those in other countries will continue to do so. 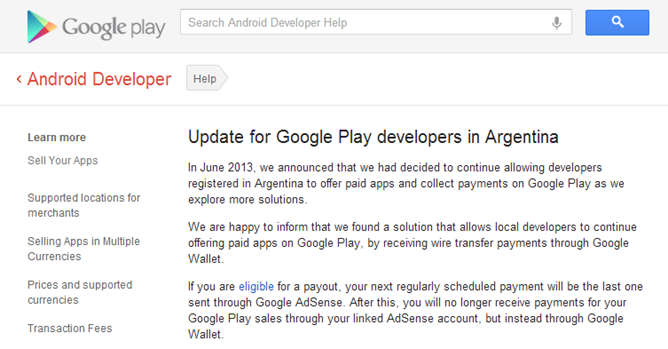 For anyone affected by this change, Google has provided these simple steps to ensure that your payments are not interrupted:

Developers need to follow these instructions even if you have already provided this information in your linked AdSense accounts.