The Nexus 6P launched in November in three colors—graphite, aluminum, and frost. However, if you were in Japan, there was a special edition gold phone that was sold through the Google Store (it eventually launched in India too). Now you can get the blingy gold Nexus in the US through Best Buy and the Google Store. The same configuration costs about $220 elsewhere, in both the smaller (18mm) and larger (23mm) band options, both of which are available on Woot. Manufacturer Huawei posted a teaser for the gold-colored 6P on its Facebook page, which indicates that it will be exclusive to Flipkart in the region. If there were a prize for color of the year, rose gold would be the 2015 champion. Ever since Apple released the rose gold iPhone 6s, every other manufacturer has been quick to launch their products in the coveted 'rose gold' variant. The color itself has somewhat of an identity crisis, ranging from the everyone-knows-it's-pink-but-let's-not-call-it-pink tone on the iPhone to the not-pink-at-all gradient of the ZTE Blade S7.

The newly announced rose gold Huawei Watch falls on the latter end of that spectrum, with plenty of gold and no traces of pink at all. Gold phones are a thing these days, but you won't be able to get Google's latest flagship in gold unless you happen to be in Japan. Odds are that you aren't, so that's a bummer. The gold version of the Nexus 6P is a special edition, and it will only be sold via the Japanese Google Store.

At the $249.99, you can still get the stainless steel or black watches with 22mm bands in "stone" or black, respectively. The new metal options cost $299 for 23mm black or stainless bands matched to the watch, and they're both shipping now.

We saw the possibilities pop up before, but it looks like Amazon is now officially selling the Moto 360 smartwatch in more colors and with alternate bands. Before today you could get the Android Wear device with a stainless steel or black finish, with black, grey, or "stone grey" bands.

Samsung announced a couple days ago that the gold Galaxy S5 will come to all major US carriers by May 30th, but the phone has already popped up on AT&T's site. There it goes for $199.99 with a two-year contract, various monthly payments with an AT&T Next plan, or $649.99 outright. The name, Copper Gold, sounds like a currency stuck somewhere between a penny and something of actual value*, but it describes the color well. 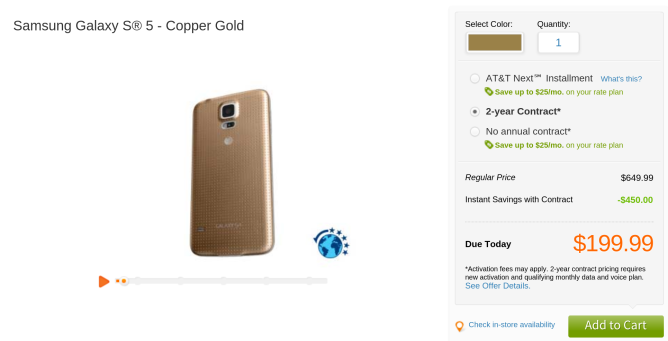 The Galaxy S4 Mini is also now available with the carrier, and it's shipping in two shades. While we wouldn't blame any of you for expecting them to be black and white, this time we're actually looking at black and pink.

Earlier today, T-Mobile announced that it would start selling the gold Galaxy S5 on May 30th. As it turns out, this is the launch date for all of the major carriers in the US. Come the end of this month, a blinged out version of the S5 will be available from the likes of AT&T, Sprint, US Cellular, and Verizon as well. 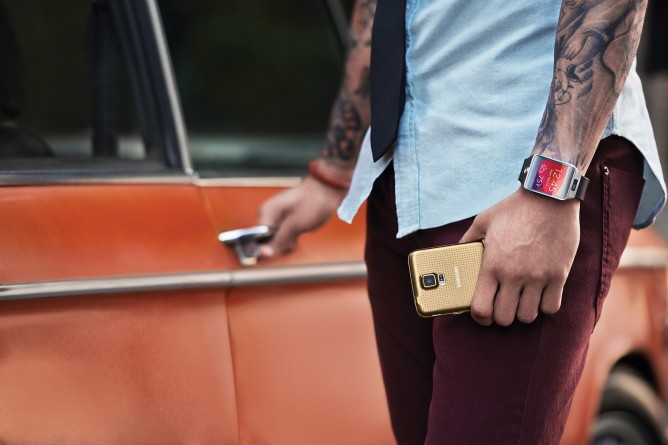 With a simultaneous release across so many carriers, this isn't about exclusivity. This is about providing the masses with a better sense of style. Yeah, the phone's still made of plastic, but just look at that color. Nothing says something about a person the way gold does.