If you've ever received a notification and thought to yourself, "I really wish my phone would play some colorful and fun animation every time I get a message," then there's no doubt that Pops is the app for you.

Calling itself the "ringtone for the smartphone generation," Pops is an app that lets you customize notifications for certain apps, namely Gmail, SMS, Facebook, and Twitter, with full-screen animations. To get a better idea of what it's all about, here is a video showcasing most of its features:

The latest post over at the official Gmail blog brings us some heart-warming and exciting news around a new Gmail Labs feature called Preview Pane.

Gmail for Android hasn't received much love lately, but Google definitely hasn't forgotten about it. The new version 2.3.5 (curiously, it matches the latest Gingerbread release version), which showed up tonight, brings a host of new features, including one that I was *just* thinking of yesterday after clicking the "Show Pictures" button for the 1800th time.

The new features are:

As I mentioned, my favorite is definitely the sticky "Show Pictures" setting, which means I won't have to click the annoying button in every email that I receive from all the deals sites on a daily basis.

There are quite a few "remote SMS" apps on the Market, but none quite like ClockworkMod's DesktopSMS. Instead of the usually browser plugin, or dedicated web interface front end, DesktopSMS takes a versatile and familiar approach: Gmail. The app will intercept your incoming SMS messages and forward them to either Gmail, Gtalk, or both, so you can reply from your computer or tablet. Once the sent message hits the receiving end, it looks as if it came directly from your phone, so there's no confusion.

Part-time developer Federico Carnales announced in September that a complete rewrite was in the works, which would not be based on the stock Android 2.0 launcher.

In a minor update to the official Gmail app, Google has addressed one of "the little things" that have been plaguing Android since the beginning. In this case, a lack of uniformity for copying text.

In all previous versions of the Gmail app, a user would have to press Menu, More, and then Select Text. Fortunately, this update fixes that issue by making copying text the same as in the Browser or a textbox: by long pressing it.

For those of us who regularly encounter a blizzard of emails, Gmail's Priority Inbox is a godsend. Previously exclusive to the desktop and Android devices, Priority Inbox has been expanded to support any HTML5-capable mobile web browser.

The process is simple. First, you have to have Priority Inbox set up for your email account (if you haven't already done so). Once this is done, load up your compatible mobile web browser and waddle on over to gmail.com

Update: This Gmail client update is only for devices with Android 2.2 or higher.

Gmail for Android received a substantial update from Google this afternoon - and the AndroidPolice team has agreed: some of the improvements are long overdue, while some of them are just plain cool. 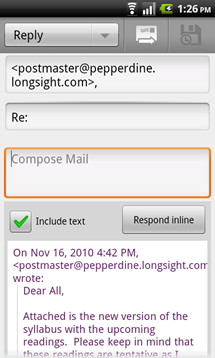 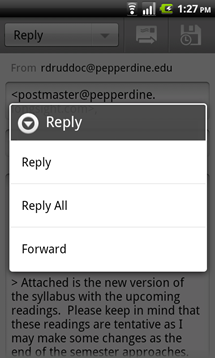 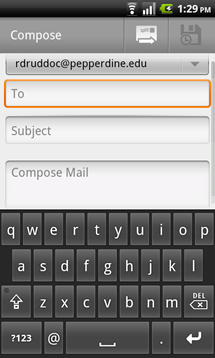 The change blurb that you'll find on the Market page lists some of the biggies, but a major one (for us, at least) has been excluded: quick folder switching.

Small bit of news, but useful for those of us firmly entrenched in the Android fan club: Google has released an official Android skin for Gmail. Changes are light - mainly consisting of light gray circuits on a white background, and an infusion of green for highlights.

All your Gmails are belong to us.

To select the theme, open up your Gmail on your PC and head to Settings (top right), then Themes.