Inertia Escape Velocity is a game in which you play a futuristic scavenger collecting what I can only assume are generic, mass produced future-machine parts.

Read More
Update: Looks like it's now available for pre-order from several other retailers in the US and Canada, including Best Buy, TigerDirect, B&H, and GameStop. Go here for more info. 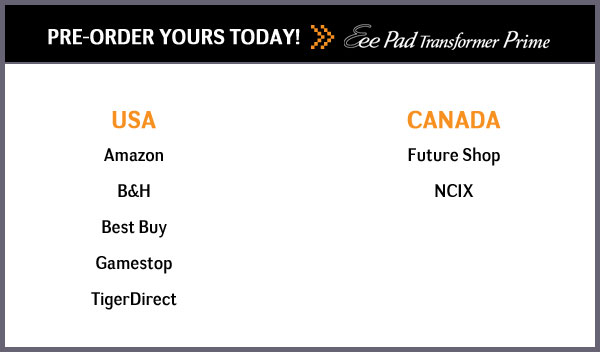 We've been talking about it for a couple of weeks now and have even seen some nice hands-on action and a video, but, finally, the official site went live for for the ASUS Transformer Prime last night. In case your memory is failing you, here's a quick refresher on this sexy beast of a tablet:

And here is that video of it running Ice Cream Sandwich:

You can check the official site for the full workup of in-depth features and specs, of which there are a lot, as well as check out some sexy pictures of the new tablet.

Gameloft, the gaming studio behind such games as Modern Combat 2, N.O.V.A. 2 HD, and Asphalt HD, has recently released a new game for all you mythology and movie fans out there. If you're familiar with Gameloft's games, though, this may be a bit different from what you've grown accustomed to.

From the movie "Immortals", you play Theseus, a-hackin' and a-slashin' through all sorts of fun Greek and Roman mythology, including, but not limited to, minotaurs, titans, and generic disposable guys in strange armor holding swords.

Every once in a while, an app comes along that revolutionizes the Android experience in an unimaginable way. More often, though, we get apps that simply regurgitate the same thing we've seen a thousand times before but with a different colored title bar or some such minor adjustment. A happy medium between the two, however, is necessary to the advancement of the platform. Perhaps the most important type of app is one that provides the functionality that we've been using the whole time but solidly improves how it is done.

I can honestly say that this is the closest to not having an opinion I've ever come in regards to a device.

How many of you out there have taken a picture only realize later that, as you were snapping the photo, somebody totally photobombed you, there is an ugly light pole in the distance, or a hobo was giving you the finger in the background? All of you, you say? Well, boy howdy, have I got an app for you! No longer will you need to employ this supposed "skill" that people claim to have in photography, nor will you need to "pay attention" when taking photos.

We all remember the T-Mobile Sidekick. It was the phone to have back before smartphones were a normal, everyday thing. It was the phone that did all the smartphone-y things first. It was built for one main purpose, though; messaging like a demon. It was all about staying in contact with your friends, shooting out emails, and texting all the time, no matter how fast you were driving. It did that job, and it did it damn well.

A few days ago I posted about my experience with the Google Voice integration with Sprint and outlined exactly how I did it. In the comments section, you guys responded with a lot of good thoughts and, in some cases, some serious bugs and questions. I have done a little bit of research, some testing, and some drinking (just kidding. Kind of), and I have some answers and responses for you upstanding, early-adopting citizens.

Back in March, when we first heard about Sprint getting the Nexus S, we also heard about their fancy new Google Voice integration plan. The idea was simple: Let Sprint users do one of two things: