So, do you remember the Samsung Galaxy View mega-tablet? It came out a few months ago in WiFi-only form, and the price dropped almost immediately because most people don't want a tablet that big. Now, Verizon is selling an LTE-enabled version that's more expensive. This is innovation.

Now the number is dipping down again. Samsung's Galaxy View is a weird device, but Samsung isn't giving up on the jumbo tablet just because no one knows what the hell to do with it. Okay, how about this: you can play games on it with the aid of a gamepad app on your phone. Cool? Oh, but the app only works on Samsung phones. Meet the S Console Gamepad app.

The Galaxy View is a device only Samsung would make. Not because it's a bad idea necessarily, but because it's a really niche product that no other OEMs really have a hope of pulling off. It turns out that maybe even Samsung is going to have trouble selling a huge 18.4-inch tablet with a built-in handle. After 2 weeks on virtual shelves, The Galaxy View is getting a $100 price drop.

There will be at least two ways you can part with $600 on a single Android tablet this holiday season. You can pick up the upcoming Pixel C along with a keyboard attachment, or you can get the Galaxy View from Samsung. Buyers going the latter route should be aware that this thing takes the mobile computer label very seriously. At 18.4 inches, you've basically grabbed one of those failed Android all-in-one desktops and started carrying it around under your arm.

The decision to do so is your prerogative, and AT&T is now giving you the option to buy an LTE-equipped model, just as it promised.

So far Samsung's plus-sized Galaxy View tablet has been given a custom CNN news app and a sort of bulletin board photo app, both of which are exclusive to the device. But Samsung isn't finished yet. Today they published a third app that, if not exclusive to the 18.4-inch tablet itself, is certainly meant to be used exclusively with it. It's a remote control app that lets you operate pretty much every input on the device via a Bluetooth-connected Android phone. If you're an existing AT&T customer but you don't have DirecTV, you can sign up for a new two-year TV service agreement and buy a Galaxy View for just $100.

The Galaxy View is Samsung's biggest tablet, and the company is positioning it as a sort of all-purpose, general-use device for an entire household rather than a conventional mobile device. To that end they've released another exclusive app for the 18.4-inch tablet, Family Square. According to the description in the Play Store, it's meant to be a digital bulletin board, allowing multiple users to post photos to the app which are then displayed on the screen. 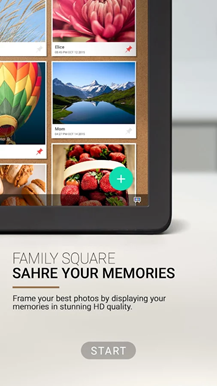 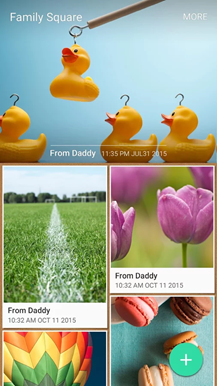 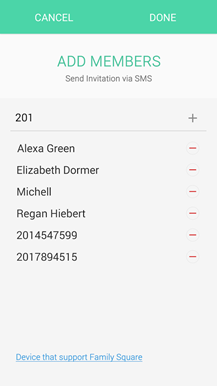 The setup is... unique. Instead of simply pulling photos from Facebook or Google+ accounts, Family Square needs to connect to individual phones, presumably over the local Wi-Fi network. The Samsung Galaxy View is without a doubt a niche product, but for the right person, this giant 18.4" tablet could be a tempting buy. Granted, $600 is a lot of money, especially when it only manages to have a 1080p screen (and a rather meager 8 hours of battery life). Regardless, the Galaxy View is now available in the US direct from Samsung or via Amazon, Best Buy, and B&H.

Ordering from Samsung does allow you to also buy an extended warranty plan with accidental damage protection at the time of purchase, at $89.99 for two years or $159.99 for three.