The community behind LineageOS, the successor to the ill-fated CyanogenMod ROM, continues to impress. New devices are constantly being added to the build roster, and we're even seeing new software features crop up, like custom Quick Settings tiles. Now the project has started supporting nine additional devices. Samsung's latest and most advanced tablet series is the Galaxy Tab S. That's kind of amazing when you consider the company's previous rate of releasing new tablets, and that the Tab S 8.4 and Tab S 10.5 were released almost a year ago. But I suppose it's nice if you happen to have one, so Samsung is more motivated to release faster updates. Today the Galaxy Tab S 10.5 on US Cellular gets its Android 5.0 update.

The update information was just posted to Samsung's support site, with a release date marked as today. So the update itself (version T807R4TYUBOE5, Android 5.0.2, if you're wondering) may or may not actually go out over US Cellular's network immediately.

Samsung's top-of-the-line Galaxy Tab S series is hard to beat, unless you're a stickler for "clean" software. If the TouchWiz skin and the physical navigation buttons don't bother you, then both the 8.4" tablet and the 10.5" tablet offer top-of-the-line specs and unbeatable AMOLED screens. The larger of the two is on sale on eBay's daily deals portal today. You can pick up the 16GB Wi-Fi base model for just $279.99, an impressive $220 off of the retail price, and $170 cheaper than Amazon.

A couple of caveats: one, while the tablets are marked as "new," the seller seems to think that the definition requires a few conditions.

The AT&T crapware on the carrier's LTE-equipped Samsung Galaxy Tab S 10.5 is playing a game of musical chairs today. An OTA update rolling out to the device moves around some icons and basically just does weird stuff, but leaves it on Android 4.4.2.

Samsung tablets usually don't do much for me - if I'm not discouraged by the software, then the physical navigation buttons are a major turn-off. But I must admit that the Super AMOLED screens on the Tab S series turn my head every time I see them. If you've been hunting for one of your own, the 10.5" Galaxy Tab S is on sale in refurbished form over on eBay. It's going for $334.99, a full $165 off of the retail price.

This particular tablet comes in the standard 16GB brown model, and though it's only "seller refurbished," it does have a one-year warranty. 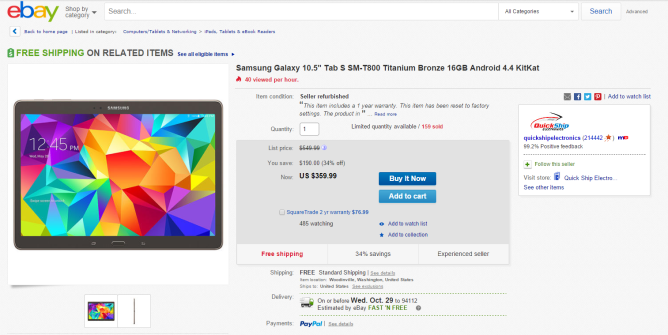 The longer you wait, the more affordable products become. These aren't necessarily words to live by, but they're generally true. Not too long ago we were happy to share with you a new Galaxy Tab S 10.5 we found on Amazon going for $446. Now we've come across a refurbished one on eBay available for just $399. That's $100 off what is one of the best tablets out there, just so long as you don't mind dealing with Samsung's added software and its love for physical home buttons.

The Galaxy Tab S 10.5 is one of the best tablets available on the market right now. Samsung has released no shortage of slates, but this remains situated among the top of the line. That's why the 10-inch tablet usually still goes for half a grand. Yet if you're interested, here's the scoop. Amazon currently has the Galaxy Tab S 10.5 discounted by $50. Now there are some caveats. We're talking about the 16GB version, and the lower price only applies to the white option. The black one still goes for $500.